1 The Story of Busse, a Six-Wheel Amphibious ATV With a Volkswagen Heart

4 "Biski" Amphibious Vehicle Promised an Otherworldly Ride, Is Yet to Deliver

5 WaterCar Gator Is an Amphibious Monstrocity
Car video reviews:
Up Next

Dubbed the fastest amphibious vehicle out there, WaterCar’s H1-Panther is an insane combination between a boat and a classic Hummer. Even more impressive, it’s surprisingly capable on both land and water.

Amphibious vehicles built by visionaries have been around since the 1800s. However, truly capable, mass-produced versions like the American LVT Buffalo or the German Schwimmwagen were developed during the Second World War.

After the war ended, the idea behind these types of vehicles gave birth to several interesting models, the most famous of which was the 1960s Amphicar. Although not much of a car or a boat in terms of performance, the tiny convertible served as inspiration for a host of modern amphibian cars.

Today, some of the most interesting models come from Southern California-based WaterCar. Founded by Dave March in 1999, the company holds 27 amphibious-related patents, as well as the Guinness World Record for the fastest amphibious vehicle.

For more than a decade, WaterCar developed and refined a prototype called Phyton. This project led to the first production model, the 2013 Panther which featured a Jeep Wrangler-like body and enough power to make it fun on water or land. If you’re a fan of Daddy Yankee, you’ll definitely recognize the Panther from one of the artist’s 2021 music videos.

Recently, WaterCar has released an upgraded variant christened H1-Panther and, as its name suggests, it comes with a Humvee-inspired body. But wait, that’s not all. The H1 is more powerful, a lot more versatile and it’s safe to say it’s the most impressive amphibious vehicle out there.

The H1-Panther is built around an original Humvee chassis which is completely disassembled and restored. The team then replaces the heavy steel and cast-iron components with new, lightweight parts made from either aluminum or stainless steel. Then, the bespoke components that make the thing float are added. These include a sturdy 6061 aluminum hull and closed foam-filled flotation cells.

WaterCar’s goal was to create an amphibious vehicle that could perform on both land and water. For that, they needed adequate power so the H1 received a Chevrolet LS3 Gas Engine and a Mercury Marine Bravo 2 Outdrive complete with a heavy-duty, stainless steel propeller. With 395 hp (40 more than the original Panther) and 375 lb-ft (508 Nm) of torque from the Chevy powerplant alone, the floating truck can easily reach 70 mph (112 kph) on the highway and 35 knots on water.

Furthermore, it can easily tackle any terrain thanks to the capable 4WD system, the large 35-inch (89-cm) mud tires, and the custom suspension system which was designed to offer ten inches (25.4 cm) of ground clearance.

According to the company, the transition from truck to boat and vice-versa takes close to 20 seconds, so owners don’t have to pause their journey when the surface changes. As for refueling, the vehicle comes with a 38-gallon (144-liter) fuel tank that enables a maximum range of 380 miles (611.5 km) on land and 96 miles (154.5 km) at sea.

On the water, it behaves like a normal 20-foot (6 m) long boat. It’s surprisingly fast for a 5,000-pound (2,268-kg) monster and it’s actually the fastest amphibious vehicle that’s currently on sale.

On land, with modern features such as power steering and brakes, the H1-Panther drives like a normal pickup truck. It looks like one too, even if its bed has been modified to accommodate the extra hardware.

Inside, there’s room for five or six passengers and although the cabin might feel pretty spartan, it features comfortable seats and can even be equipped with an optional air conditioning system.

Speaking of which, WaterCar prides itself on offering a wide range of customization options for its potential customers. From paint to the configuration of the cabin, almost everything can be modified to fit each individual owner’s desires.

Developed to operate in some of the harshest conditions one can encounter, each H1-Panther takes about 2,000 hours to put together. Combine that with the high-quality components used to assemble one, and you’ll begin to understand why its base price starts at $465,000. I know, that’s enough money to buy a nice boat or a heavily customized off-roading rig, but for a combination of the two, it’s actually a pretty fair price.

The world of civilian amphibious vehicles has come a long way from the days of the Amphicar and the epic Panther-H1 is the perfect example of that. Unlike its ancestors, it’s a no-compromise rig that can not only transition from land to water but perform extremely well on both. 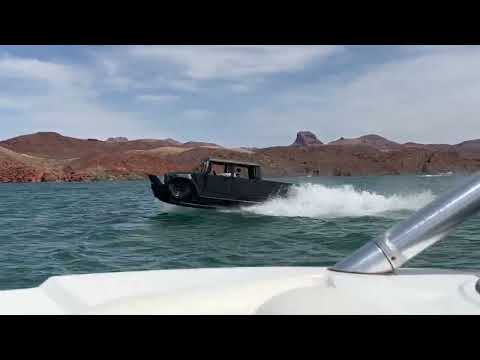