4 A Look Back at Chevrolet’s Iconic W Engine, the First in a Long Line of Big-Blocks

While the automotive industry is slowly but surely moving on from internal combustion engines, the story was much different half of a century ago, when gargantuan eight-cylinders engines were rumbling under the hoods of the era’s most fascinating cars.

The year was 1970 and although a massive oil crisis that ended up changing the history of the American automotive sector was only a couple of years away, Detroit’s biggest carmakers were still engaged in a heavily-contested horsepower war.

With the era’s most fearsome muscle cars were being powered by big-block V8s such as Chrysler’s iconic, NASCAR-derived 426 HEMI, Chevrolet needed a new heavy-hitter to revitalize their lineup. And the answer came in the shape of a 454-ci (7.4-liter) monster.

Based on the same Mark IV architecture that had made the 427-ci (7.0-liter) big-block a legend in the previous four model years, the 454 was not just an enlarged, but a thoroughly upgraded engine.

The new powerplant retained its predecessor’s 4.25-inch (108.0 mm) bore, whereas its stroke was increased to 4 inches (101.6 mm) allowing it to create more ponies in standard, factory-spec form.

The manufacturer made it available on its most popular full-size models like the Caprice, the SS-badged versions of the Chevelle, El Camino, and Monte Carlo, as well as its flagship sports car, the C3 Corvette.

For all these Chevys, the 454 was an optional engine and, depending on the model, it could be had in one of two configurations. The first, dubbed LS5, was available on all the aforementioned cars with an output rated at 360 hp for Regular Production Option (RPO) Z15-equipped SS cars, and close to 400 hp in the C3 Corvettes. These figures were not much of an upgrade over the high-performance versions of the preceding 427, but things were much different when it came to the second 454 on Chevy’s menu.

Codenamed LS6, it was only available for the Chevelle and El Camino SS muscle cars with no less than 450 hp on tap. This figure was made possible by a higher, 11.25:1 compression ratio, upgraded heads, a solid lifter camshaft, forged aluminum pistons, a low-rise aluminum intake, and a big, 800-cfm four-barrel Holley carb.

While the LS6 never made it under the hood of a factory-built Corvette in 1970 (it did a year later with 25 less ponies), this 454 transformed the Chevelle SS and its pickup sibling into muscle car kings. Rumored to have been grossly underrated by the manufacturer in order to keep insurance premiums at bay. Legend has it that in reality, the epic big block could make over 500 hp without the slightest mod. Add to that a max torque rating of 500 lb-ft (678 Nm) and the result was the most fearsome V8 that could be had in a GM muscle car.

Magazines of the era recorded quarter-mile (402 m) times in the low-thirteens with stock, LS6-powered Chevelles, which made them quicker than similarly sized, HEMI-powered Mopars like the Plymouth GTX or Road Runner.

Interestingly enough, Chevy also offered a third version of the 454 called LS7 (not to be confused with the modern, small-block of the C6 Z06 Corvette) that was capable of producing 465 hp and 610 lb-ft (827 Nm). However, this variant was only available as a crate engine, so it was never fitted onto a factory-built vehicle.

As impressive as it was, the 454 arrived late to the muscle car party. From 1971, output figures began to drop in response to the looming oil crisis, and even though the engine continued to be available in passenger cars, it was choked down to well under 300 hp by 1976. From that point on, Chevrolet saw no sense in powering its cars with the 454, but the engine continued to thrive as part of the division’s pickup truck lineup for the next 25 years.

Although it was a one-year hit in terms of raw power, this potent big-block quickly attained legendary status and in combination with the 1970 Chevelle SS, it earned its place in the muscle car hall of fame.

If you would like to learn more about the history of this engine and the car that made it famous, we recommend the YouTube video below by OldCarMemories. 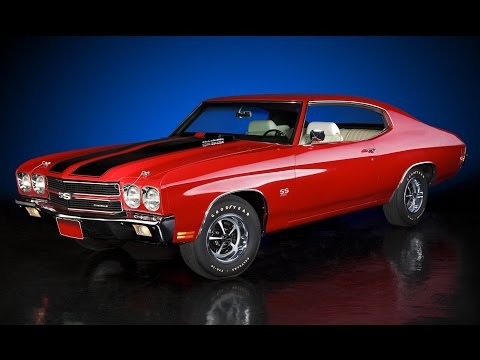