2 1976 Chevrolet Monte Carlo Was Buried in Trash for Years, Comes Back to Life

5 Big Barn Opens Up to Reveal Stash of Chevrolet Tri-Fives and Corvettes
Car video reviews:
Up Next

The Largest Collection of Amphicars Is Rotting Away in the Woods

The Amphicar Model 770 is perhaps one of the most famous mass-produced amphibious vehicles and, while it was never particularly outstanding as either boat or car, it is a true collectible. Some 47 of them are now rotting away in the woods in New England.
12 photos

The Amphicar Model 770 was produced between 1961 and 1968. Of the 3,878 units made, an estimated 90% were shipped to the United States. Of these, less than 500 are believed to have survived and, as we learn from the latest video from Drive Analog (see below), 47 of them are rotting away as part of the largest private collection in the country.

Drive Analog is a channel where strange and abandoned vehicles find a new lease on life, with Darren’s help. Videos highlight barn finds and then their restoration process, and the latest is no different: Darren got a call about a few potential contenders, so he drove to a New England property. To his surprise, he found there an assortment of odd and old vehicles, as well as what he calls “the largest collection of Amphicars in the US.… 47 plus a few parts here and there.”

The video only shows two of them in greater detail, and then an underside that’s seen better days. One of them was actually used by the owner back in the day and has been stretched out to accommodate all of his seven kids. The owner jokes about the teak elements and how the person who added them promised never to work with “non-indigenous wood again.” This one has been used extensively, including out on the ocean, the owner says. The other has only 1,100 miles (1,770 km) on the odo.

We assume that, as Darren guessed at the start of the video, he wasn’t allowed to film all of the vehicles on the property. In other words, we have no choice but to take his word that this is the largest Amphicar collection in the country.

The video also shows a 1964 New Yorker sedan, an 8-door 1972 Checker airport limousine formerly owned by the U.S. Navy, a Red Radish Chevrolet 3100, and an Austin-Healey Frogeye Sprite that Darren declares a prime candidate for restoration, despite the fact that it’s been sitting exposed to the elements. These are just the highlights: the property also houses an assortment of buses, RVs, heavy-duty trucks, and dilapidated oldies.

In fact, most of the vehicles shown in the video have been sitting outside. The owner declares himself a passionate collector and says he traveled the country to get most of the items here. He knows a lot about each of their history, but has not attempted to restore them. 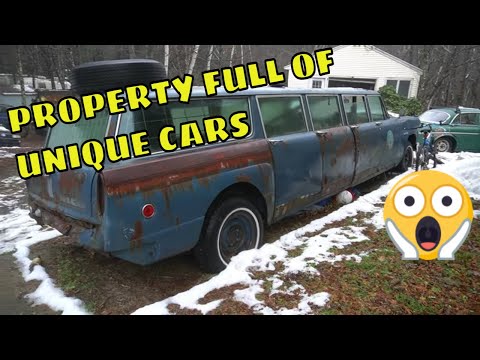