Meet Bamse, One of the World's Smallest Campervans

Ancuta Iosub
Motorhomes have to make clever use of space due to their limited footprint, and this can sometimes be a challenge. The small space and movement of the vehicle while on the road mean that people choosing vanlife face limitations of what and how much they can take with them on their adventures. Today we’re looking at a cute tiny microvan that takes downsizing to new levels.
12 photos

This 1989 Suzuki Super Carry, nicknamed Bamse, is a microvan that will show you what packaging efficiency really means. You’ll be surprised at how many features a vehicle measuring just 10.2 feet (3.1 meters) long and 4.7 feet (1.3 meters) wide can offer.

Calum Gillies, Bamse’s owner, found and bought this Super Carry in 2015 in Glasgow after an extensive search and turned it into his motorhome to tour all over the Scottish Highlands & Islands. He lives on the Isle of Raasay in Scotland, and his love for these little vans goes way back to when he was a child and was watching the Suzuki vans unloading goods off the ships and delivering them to the islanders.

Originally designed and made in Japan, the Suzuki Super Carry has been in production since 1961. Manufacturing of the van spread across ten countries abroad later on, and the minivan was sold by both General Motors and Ford. And though it might not be the safest or most off-road ready van, it’s still a reliable, economical, and surprisingly capable rig. Not to mention very adorable.

Calum’s 1989 Suzuki Super Carry 1000cc microvan takes power from a 1.0-liter engine making around 40 horsepower (40.5 ps/ 30 kW), mated to a five-speed manual transmission. The powerplant is located below the floor as the minivan features a cab-over layout, and this means a lot of heat gets into the cabin, which is quite convenient when traveling on winter days but not that great during hot summer days.

Bamse even has a registration as a motorhome with the government, and the owner says it might just be the smallest campervan in the UK. It is definitely among the tiniest in the world, though.

Despite its small size, Bamse packs almost everything a minimalist might need while on the road. And that’s because Calum made sure to make the van efficient for adventures around Scotland. Now the tiny motorhome offers a place to sleep, a removable table, a stove, a sink, and even storage space.

The modifications Calum and his dad made include replacing the old stereo head unit with a new Bluetooth-compatible one, pairing a Sony PSP for in-vehicle entertainment, and wiring and installing a leisure battery to have power even when not in the proximity of an outlet or grid.

At the rear of the van, he swapped the original two-burner stove for a butane cooktop that is more space-efficient than the original setup. Also at the back, there is a miniature sink and a closet big enough to store a backpack with your bare necessities.

Now, the Super Carry is just 5.1 feet (1.7 meters) high, so a taller person would have a hard time standing inside the van. But Bamse has a pop top that allows enough space to stand up and it goes all the way from the front to the back of the van.

Calum traveled all around Scotland in his cute little motorhome, and its small size made it very convenient in terms of parking arrangements. He didn’t have to look for a dedicated campsite to spend the night.

He confesses he had a lot of fun with Bamse and made plenty of fond memories in it - he even took his sister to her wedding in the minivan - but it’s now time for them to part ways as he’s currently building a Nissan NV200 as its replacement. If you’re not claustrophobic and don’t plan to venture too far from the beaten path, Bamse might be your ideal minimalist and inexpensive adventure rig. 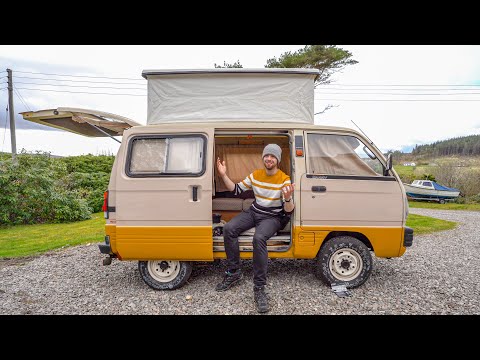