4 The New Campworks NS-1 Teardrop Trailer Is Just as Badass But Better, Can Now Charge EVs

All stories of dreams come true start with an idea and one man or woman’s relentless pursuit to bring it into reality. This is one such story: Jayco, the giant RV manufacturer, and Lloyd J. Bontrager’s dream of a pop-up camper that would be all about family time, quality, and affordability.

The industry of RVs spurted in the late ‘50s and flourished throughout the 1960s, and one of the pioneers in this revolution on the North American market was Jayco. Today, Jayco is one of the world’s largest RV manufacturers, with a strong presence in its home country, Canada, and Australia, but also in Japan and Europe. Just to give you an idea of how successful Jayco is, in 2020, Jay Flight was awarded the number one selling travel trailer in North America for 15 consecutive years.

It all started with an idea and a unique invention derived from it.

In the mid-’60s, Lloyd J. Bontrager was working for an Indiana-based RV manufacturer. The RV market was booming, but Bontrager was not exactly happy with his position in the company, even though it afforded him some room for his many ideas, which led to the creation of a sewing department and improvements on existing campers. In 1967, he left the company with plans to start his own, and make RVs that would place the focus on functionality, ease of use, affordability and quality. These are still essential traits of the Jaycos of today, despite the fact that Bontrager is no longer around.

In 1968, Bontrager created the first prototype for the future Jayco camper, using his own invention, which would, in time, become a Jayco staple: a pop-up mechanism activated by crank and protected against dirt by a cover. The idea was that you could have something better than a tent for a family holiday but which, at the same time, wasn’t a trailer that would put too much stress on the towing vehicle.

Sure enough, pop-up campers weren’t new, but what made Bontrager’s product instantly appealing was his stress on quality materials and affordability, and the patented pop-up mechanism, which he called “ease-up lifter system” and that was unique for the time. The prototype was scaled up and three prototypes developed under the Convertible Camper or the Jaybird series: the Jayhawk, the Jayeagle, and the Jayrobin.

At first, Jayco operated out of two chicken houses and a barn, with Bontrager and two partners, a handful of employees, Mrs. Bontrager doing the bookkeeping, and his sons helping out with the designs. The following year, Al Yoder was brought on as partner, and the business grew out of its humble production line, moving into a proper factory and selling 132 campers in that first year. It was the start of a multi-million business that would survive many financial downturns that took out competitors, personal tragedy, and shifting trends, to become an icon in the RV sector.

Pictured in the gallery is one of the first Jayco Jayhawks produced, currently on display at the Recreational Vehicle / Motor Home (RV/MH) Hall of Fame Museum in Elkhart, Indiana. It is a 1968 Convertible Camper donated to the Museum by Bertha Bontrager Rhodes, Bontrager’s widow, and restored by Jayco itself. The description says it was the 40th unit of those 132 produced in that first year.

The Jaybird series, which included this Jayhawk, offered sleeping for six to eight people, depending on model, with two double beds on the pop-out sides. All three models were single-axle trailers, with standard features including 4-ply tires, the patented pop-up system, an icebox, a 3-burner stove, formica cabinet and table tops, vinyl-coated paneling, 12-gauge steel frame, sandwich roof construction with styrofoam insulation, city water hookup, cushions and mattresses, and curtains and drapes. It wasn’t much by today’s standards, when RVs can feel like luxury apartments on wheels or even actual mansions, but it was a lot by those days, especially for that price.

Proof of that is found in the popularity of the Jayco campers. By the ‘70s, the company had already expanded nationally and into Canada, developing a wider range of products for all needs and budgets, and a network of dealers considered part of the Jacyo family. It wasn’t until the ‘80s that Jayco got into the budget sector properly, but still maintaining the focus on quality work, with the J (later Jay) series. They also continued to develop the pop-up system, even creating a half-tent half-camper hybrid in 1982: the Jay Tiki Tent Camper, which folds out and slides down on to the ground.

Today, Jayco produces pop-up campers, fifth-wheels, toy haulers, Class A and C motorhomes, and conventional travel trailers, and even does conversions through its Australian brand. It is now a subsidiary of Thor Industries, but it still values the same Christian, family and quality values as it did when it first got started – and the unique ease-up lifter system is still around. 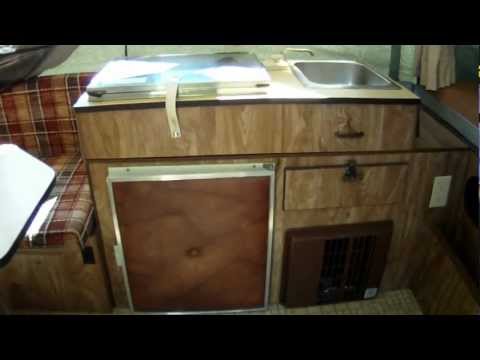 Editor's note: This article was not sponsored or supported by a third-party. Photos in the gallery show several early models of the Jayco campers, while the video is of an 1980 Jayco Jayhawk.