One of the cheapest hot hatches, the Suzuki Swift Sport was released in 2017 at the Frankfurt Motor Show, reaching its 3rd generation.

The exterior was redesigned with a wider and lower stance and the small Swift got a more aggressive styling. At the rear, the Swift got a new diffuser look.

The Swift Sport was built on the new Suzuki platform that increased the overall performance through with being light weight and highly rigid. The wheelbase was with 20 mm longer.

Compared to its predecessor, the new Swift’s rigidity was improved by 1.4 times. The rear suspension was improved for 2017 and offered great stability even at higher speeds.

Inside the cabin, the plastics used weren’t great, but the colored interior accents compensated with a nice look. New gauges that indicated boost and oil temperature enhanced the sporty experience.

The new Swift featured a Bluetooth connectivity, as well as a 7-inch touchscreen display with an SD Card 3D map navigation.

A 1.4-liter boosterjet engine was mounted on the Swift Sport and it delved 230 Nm of torque. While it delivered high power, the fuel consumption remained decent. 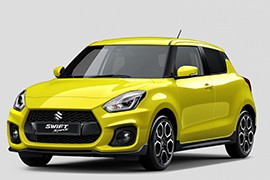 3 The 5-Door Suzuki Jimny Is Almost Here, And We Can't Wait to See It Dressed Like a G-Wagen