Designed for the busy city streets, the subcompact crossover Suzuki Ingnis was a small city car that offered practicality and style at an affordable price.

Despite the Ignis’ modest dimensions, the small car had a modern and rugged styling. At the front, the grille-integrated LED headlights draw all the attention. At the rear, the Ignis featured uniquely-shaped taillights.

Inside, the Ingnis had a distinctive and fresh styling with a two-tone dashboard and unusually placed door handles. A 7-inch touchscreen was placed on the dashboard and with the rear-view camera, the driver could avoid any obstacles when parking or driving in reverse.

The boxy cabin provided lots of headroom even for the rear passengers. The cargo area was also impressive for a car in this class, offering 267 liters of storage, or around 500 liters with the seats dropped. The rear seats could slide back and forth separately.

With the large windshield and the high driving position, the driver had great visibility all around.

While the main focus of the Ignis was to offer city driving practicality, the engines offered a great fuel consumption. Of course, the engines were not punchy, but they performed well in city conditions.

New for 2017, the SZ5 model featured the Suzuki’s Allgrip Auto, a four-wheel-drive system that was first introduced with the Swift. 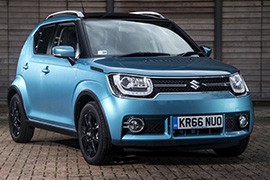