1 ORA Punk Cat Is More Than an EV: It Is a Volkswagen Beetle on Steroids

3 Live Pics: Great Wall May Have Bigger Plans for Europe Than It Has Disclosed

Does placing cute flowery or butterfly-ery stickers on the hood of your car really make it a girl’s car? Not really, no, if you ask Great Wall Motors’ ORA brand of electric vehicles.

Only pastel colors and women-only features can turn a car into a girl’s car. Whether you believe the cliché that women are worse drivers than men or not isn’t even the point here, because ORA definitely does. The ORA Ballet Cat is proof of that.

ORA Ballet Cat is the smaller and cuter sibling of the ORA Punk Cat, both of which might make it to the European market sometime soon, since ORA has patents for both. Both EVs have been in the headlines before, because they’re ripoffs of the iconic ‘60s Volkswagen Beetle – so obvious that even Volkswagen said at one point that it was exploring legal options.

But the Cats have been in the news for more than just their striking resemblance to the Beetle: the Punk Cat is for the boys, while the Ballet Cat is for the ladies. ORA isn’t even trying to be subtle with this choice: punk badassery for the men, and ballerinas for the ladies. Blue for the boys, pink for the girls. So it should come as little surprise that this division by gender is taken even further: the Ballet Cat has launched on the Chinese market, and it’s a hilarious mix of women-only features and specs, gift-wrapped in the girliest girly package you could ever imagine.

According to CarNewsChina, the Ballet Cat is designed as the ultimate chick ride, starting from the exterior and interior colors and styling. You get soft pastel colors and combinations, both for the paintjob and the interior, and supposedly useful features like a LED-lit vanity mirror hidden in the sun visor, a makeup compartment under the wireless charger in the center console, a selfie stick that also uploads content directly to social media, and driving modes preset with a female driver in mind. Even the steering wheel is designed for a woman’s hands, while the wireless charger is called Swan Lake and has a crystal-like super-delicate appearance, like a giant diamond that holds the charger within.
Speaking of driving modes, there’s Lady Driving Mode, which includes automatic cruise control with extra distance from the car ahead, voice-controlled parking and reversing, and an extra warning system for distracted driving. Wind and Wave Mode is for those times when the weather takes a turn for the worse and the poor damsel in the driver’s seat completely loses her head. In that case, the Cat automatically closes the windows, adjusts AC and lights and wipers, and puts even more distance between itself and the cars ahead.

Last but not least, there’s the Warm Man Mode, which is not one of those types of boyfriend-pillow-thingies, but a mode meant to alleviate menstrual discomfort by turning on the AC and the heat (hopefully not at the same time, though) through the main display. ORA says that women feel cold and “therefore panic” when they’re menstruating, so the Ballet Cat will help to “warm the body and the mind.”

Powered by a single motor at the front, the Ballet Cat is offered with two options for the battery (49.93 kWh for a 401 km / 255 miles CLTC range and 60.5 kWh a 500-km / 311-mile CLTC range, as per the media outlet), 171 hp and a top speed of 155 kph (96.3 mph). But most importantly, it’s offered with everything a woman needs to feel comfortable, pretty, and safe on the road, at least where ORA is concerned. Because women are special creatures who can’t just drive a man’s car, not when they have so many things to do like put on makeup, turn on wipers, tend to cramps, or buy tampons, and be special.

As we speak, there’s considerable buzz online, outside of China, about the sexism in marketing a car as a women’s only product, with female-only features and specs. As we’re nearing peak wokeism but continue to strive for gender equality, a pastel-colored car with this type of features is the proverbial elephant in the China shop.

Cultural differences aside (*which are hardly negligible), the best reaction to this otherwise kinda-cute-but-still-a-shameless-ripoff EV and its apparent sexism is to just laugh. Truth be told, I could own and drive a car like this, and I’m not sure it would be entirely ironically. 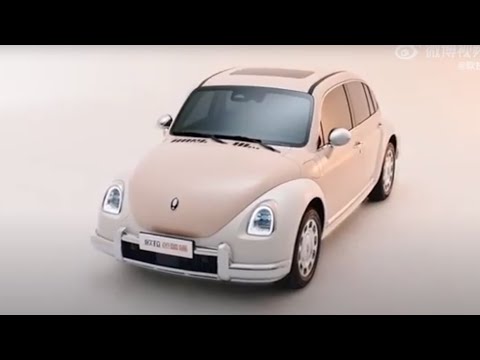