The Beetle was one of the most important cars ever made.

It was produced in over 21 million units. After WWII, from the remains of its factory, Volkswagen was reborn due to the little car.

Designed by one of the greatest automotive engineers in history, Dr. Ferdinand Porsche, by the order of the most feared dictators, Adolf Hitler, the VW 1200 was revived in 1945 with the help of the British Army officer Ivan Hirst. He convinced the British Army to order 20.000 cars.

The Beetle was a car built over an X-type chassis. The car's design was made by Ferdinand Porsche since the beginning of the '30s with the 1932 Porsche Type 12. Apart from the flat windows, the rest of the car was rounded. To ease-up the assembly process, the fenders were bolted onto the main body. In 1945, when the production was restarted, there were some modifications to the original concept and a split-window appeared in 1949.

The interior of the car was basic, with two seats in the front and a bench in the back. The flat dash panel was metallic and featured one dial before 1945. A set of turn-signals was installed in the car.

The engine was a flat-four. All Beetle had a flat-four since its conception. After the war, the only engine available was a 1.1-liter unit. Over time it evolved to a 1.2-liter and then a 1.3-liter unit. Some later vehicles were upgraded to single-point injection instead of carburetors and a 1.6-liter unit. A manual four-speed on the floor was the only option for a long time. Later on, some models were fitted with a 3- and 4-speed semiautomatic. Production ended in July 30 2003, in Volkswagen's factory from Mexic. 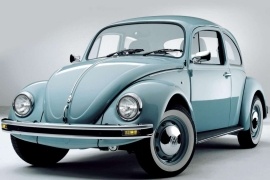