If you often find yourself daydreaming about ditching your current life and starting fresh but on the road, yet you never seem to find the motivation for such a huge step, maybe Olive can help. Chris and Sam, the builders of the Olive van, slash tiny home on wheels, want to serve as your inspiration.

The 2020 international health crisis and the many restrictions it brought along paved the way for #vanlife to take over your social media feed, the mass media, and every sector of the RV market. Since we’re hosting a virtual RV party throughout the month of July, there is no better moment than the present one to have a look at some of the most famous, expensive, impressive, or creative mobile homes.

Olive would fit right in.

Olive started as a Volkswagen minibus, of the kind used to transport people over shorter distances. Chris and Sam, a young married couple from Plymouth, England, bought it for just £3,400 (approximately $4,100 at the current exchange rate) in early 2021. By that time, restrictions had already been lifted in most territories, but the moments spent indoors had left them with “a burning desire” to travel full-time, they tell The Sun in an interview.

A van for a home seemed like the best way to do so, yet they wanted it to reflect their personality and, more importantly, their needs. That meant they would have to do the conversion themselves, and they were able to cut costs by using Chris' dad's workshop, including all the tools and the available storage space. Almost one year and £10,000 ($12,000) later, they hit the road and have been traveling through Europe ever since, documenting their adventures on YouTube and social media under The Travel Duo moniker.

Their little Olive home, which has been designed for two adults and the adorable Spaniel pup Fletcher, is featured on the latest season of the Channel 5 series Million Pound Motorhomes, which premieres this Sunday, July 24. Olive stands out for its rather unusual layout, the fact that it’s a DIY conversion by inexperienced builders (but who have had help from experienced ones), and because it’s closer to a tiny home in terms of creature comforts than to a van.

The living area is separated from the cabin by a partition with an “escape hatch.” This allows Chris and Sam to move to the front area and drive off in bad weather, and it also allows freedom of movement to Fletcher in case he gets bored during a drive. Right behind the driving area is a lounge slash reading room slash office slash dining area, with a small table for two, a couch, a bookcase, and a place for Fletcher to sleep on the floor if that's what he wants.

The kitchen is small but more than enough for the couple. It has oak worktops, a sink, a two-burner stove, an oven and a small fridge, and plenty of storage. Both Chris and Sam are vegan, and that comes in handy in terms of grocery shopping and the kind of stuff they need refrigerating for. Opposite the kitchen is a wet bathroom with toilet and shower, and there's an exterior shower as well because Chris is an avid surfer. Plus, as anyone with a pet will tell you, walking your dog on the beach might be ideal for gorgeous photo-ops, but it's also incredibly messy.

At the rear is a two-person bed suspended halfway, with storage underneath. Because half of the bed is located behind the bathroom wall, the sleeping area feels isolated and private, almost like a nook. Up on the roof are solar panels and a sundeck, designed to make the most of the one thing you can never get enough of in the UK. With the solar panels and the 100-liter (26.5-gallon) freshwater containers, the two can go completely off-grid for four or five days if they’re mindful about consumption.

In two months, Chris, Sam, and Fletcher traveled to 11 countries, including France, Switzerland, Liechtenstein, Germany, Austria, Slovenia, and Italy. They tell the tab that, right now, with Europe in the middle of an unprecedented heatwave, they’re heading back to the UK because the scorching weather doesn’t agree with Fletcher. They plan to resume their travels in the fall, with Norway on the list of countries to explore next.

Chris and Sam say they ditched their old jobs and “left” their old home, but they don’t get into the specifics of how they’re able to finance their travels these days other than through monetizing their content.

For the time being, the plan is to keep Olive as their permanent home, and they would rather not think about the day when they might have a change of mind. What they’d like to think of instead is that their story might help others undertake this amazing journey. “Nobody knows what's around the next corner but we plan to spend the next few years creating memories in the van and sharing our experiences along the way, hopefully inspiring others to chase their dreams too,” they say. 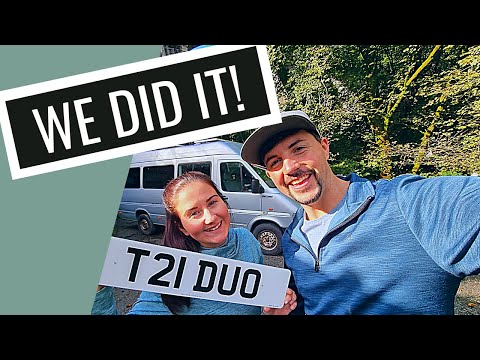