2 Remembering the Iconic Bedroom on Wheels, the '50s Dormobile Campervan

The 1970s, also known as the “Me decade,” were troubled times for the people of the U.S. due to high inflation, unemployment, social and cultural upheavals, and financial crises. The ‘70s also proved the perfect storm for the birth of a truly revolutionary recreational vehicle: the Harmon Shadow trailer.

Meet the 1971 Harmon Shadow Gooseneck Trailer, “The Most Beautiful Trailer in the World”

The Harmon Shadow wasn’t just a trailer, though. It was a fifth-wheel-type of trailer that came with a patented hitch that attached to the roof of the towing car, which, for once, could be almost any family car. Lightweight but spacious, and with the option to get it fully kitted and ready to go, this gooseneck trailer was presented as “the most beautiful trailer in the world,” which offered “superb ease of handling, economy and the ultimate in safety.”

The Shadow trailer was “by far the most sensible, safest, and most comfortable way to travel!” according to brochures at the time. Its highest selling point, though, was the fact that it didn’t attach to the towing vehicle in the traditional way but through the roof hitch. Like the El Chico designed for the Volkswagen Beetle that would come three years later, the Shadow boasted the ability to allow the towing vehicle a 360-degree turning ratio. Somewhat like El Chico, with which it’s often and mistakenly identified with, the Shadow burst onto the scene as a truly revolutionary RV – and then just as quickly disappeared.

The Shadow was launched in 1971, on the 25th anniversary of Harmon Electronics, a Warrensburg, Missouri-based company that produced electronics for the railroad industry. Harmon Industries, an offshoot of Harmon Electronics launched on the occasion, marked the latter’s attempt to branch out on the still profitable market of family RVs. It was in production only until 1975, with some 1,500 units being made in total.
The idea with the Shadow was to deliver a product that would fit all families, regardless of size, budget, or towing vehicle. The tow hitch system, which Harmon Industries patented in 1974, included a removable steel plate that would bolt to brackets placed along the roof gutters, taking “advantage of the roll resistance built into modern roofs.” In theory, this made any family car ideal for towing when towing was needed – a most revolutionary idea that would end up killing the product.

Either option included a king-size bed with a thick foam mattress at the front and enough room to sleep up to six people comfortably, according to the brochures. The fully-equipped unit came with additional berths at the rear, the standard ‘70s shag carpet and matching curtains, a Magic Chef kitchen unit with fake leather inset panels on the cabinetry, dinette, rotary phone, radio, the works (*such as they were at the time). An awning extended living space into the outdoors, while the roof was said to be solid enough to double as a patio that could be used for dining, tanning in privacy, or stargazing.

As fancy as these options were, they had nothing on the roof-mounted tow hitch. Harmon Industries claimed it did away with the risk of jackknifing, thus increasing safety, and improved car performance and gas mileage, because the trailer sat closer to the towing car than a regular one. The Shadow had electric over-hydraulic brakes and an aerodynamic silhouette that “substantially reduced” drag, so it was easy to operate whether on the highway or in tight camping spots.

The Shadow was, in short, RV perfection – at least on paper. The reality was that, on the road, it placed too much stress on the roof of the towing vehicle, causing irreparable damage. Early buyers found out that the patented steel plate wasn’t removable as advertised. Or that the rear wheels of the towing vehicle would lift off the ground in case of sudden braking. Or that the entire roof would be torn off in the same scenario. Or that the trailer would tip on turns or in high winds because of the high gravity center. Life-threatening stuff, you know.

The Shadow disappeared as quickly as it popped up on the radar, enjoying very short-lived popularity. Some of those 1,500 units are still around, though, but they’re still not getting much love. For instance, the rig below is a ‘72 Shadow with a ‘72 Caprice in a worse-for-wear condition. It was initially offered for sale in 2020 for $10,000 but, as of May 2022, still hadn’t found a new owner willing to invest extra effort and money in it. The fact that it’s now asking $35,000 doesn’t help, either.

Still, for all its shortcomings, the Harmon Shadow deserves some recognition. It was a revolutionary concept that became an affordable and quite fancy product for regular families, an RV that dared to dream big and failed accordingly. 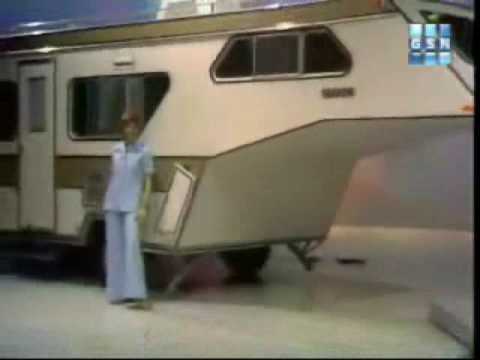