2 Inside Lenny Kravitz's Trailer, Where Taylor Swift and Joe Alwyn Vacationed in the Bahamas

5 Airstream Heritage Center – A Century Worth of Luxury Travel-Trailers
Car video reviews:
Up Next

Thanks to the wonder of the Internet, you’ve probably peeked inside many RV renovations, and quite a few Airstream trailers turned into homes. But once you take a look at Mavis 2.0, chances are you’ll never forget it. In fact, you might even start dreaming about it. Because this former rusty, old Airstream Sovereign is now a stunning boho paradise on wheels, thanks to the incredible attention to detail of a young couple.

When the Mavis 1.0 was revealed back in 2017, it was easy to think that its outstanding bohemian design could simply not be topped. But the couple who had transformed it into a tiny house with the help of the Georgia-based NuAbode, making it famous across social media platforms, decided to do even better.

Their first project, based on a 1975 Airstream Overlander, found new loving owners. Meanwhile, Sheena and Jason started creating their new mobile wonderland. Things were not looking promising – the 1977 Sovereign had nothing that was worth keeping (except an orange armchair that has high hopes of being reupholstered someday), and it smelled bad.

But some unexpected vintage photos from those times randomly left inside, spoke of the Airstream’s nostalgic spirit that had to be brought back to life in a modern boho-chic style.

Sheena and Jason specifically chose a larger, mid-bath model after realizing that they did need a bit more comfort and privacy. The 31-foot (9.4 meters) Sovereign allowed them to add a comfy king-sized bed, as well as a private office for Jason.

After the difficult task of gutting the old trailer down to the frame, Sheena worked her magic. Using a 3D rendering app, she carefully laid out the floorplan and chose the color palette and materials for each area.

The vehicle’s front half was dedicated to the living area and the kitchen. A 64-inch-wide (163 cm) sofa, which they chose to buy because making one for their previous home turned out to be both expensive and time-consuming, sits right under the windows. The gray color might sound like a surprising choice for this colorful home, but it was meant to provide a neutral setup for the gorgeous and unique pillows and other textiles.

The kitchen inside Mavis 2.0 is double the size of their previous Airstream, enough to fit it a 17-inch-wide (43 cm) gas oven and cooktop. You can immediately notice the cool bar area, a narrow space that’s meant to be multi-functional. It acts as a dining area, an office for Sheena, or simply a nice place to just relax and take in the view.

After a day-long day of work (Jason has a full-time telecommute job and Sheena is a freelance graphic designer), the two can chill on the couch, watching some TV (placed on a custom-built stand) or playing on their mini Nintendo system.

Like every other part of the ’77 Airstream, all elements in the kitchen are in perfect harmony in terms of color, style, and function. The 22-inch (56 cm) sink made of composite, which is supposed to look like granite while still being lightweight, stands out due to the matte black finish with flecks of shimmer, perfectly complementing all the gold-toned light fixtures. If you want to know more about this incredible kitchen remodel, there’s a detailed account of the process on the couple’s website.

Since privacy was one of the main reasons for buying and converting another Airstream, it was very important for the couple to be able to separate the trailer’s front side (where Sheena works) from the rear (where Jason’s office was set up). But they also didn’t want to simply close off the kitchen. The ingenious solution came from Sheena’s dad and his team, who happen to work on trailers themselves. Instead of a kitchen door, they opted for an unconventional bathroom door that can double as a temporary partition by swinging open and latching to the wardrobe’s exterior.

Moving on to the small bathroom, there’s enough room for a 24-inch (61 cm) square shower pan with a built-in seat and a composting toilet. According to Sheena, the frosted plexiglass partition separating the shower from the sink allows more natural light inside, thanks to the window above the sink.

The final “stop” inside the Mavis 2.0 is apparently very simple because it’s all about the big, comfy bed, something that Sheena was dreaming about, considering her back pain. It’s also a hydraulic lift bed so that the two can easily access the storage space underneath it. But even this simple bedroom reflects the gorgeous bohemian style that makes Mavis 2.0 unique, thanks to the incredible attention to detail. There’s not a single item inside this tiny home that doesn’t seem to tell a story.

Together with their beloved dog Riley, Sheena and Jason are living the dream – after all, it all started with the desire to turn those fun vacations into a permanent lifestyle. “From abandoned Airstream to dream home” – that’s how the two sum up this bold renovation project that’s truly one of the most inspiring homes on wheels out there. 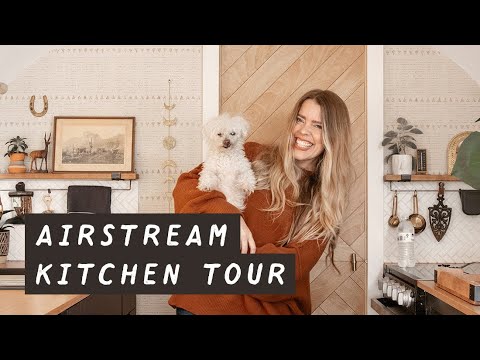