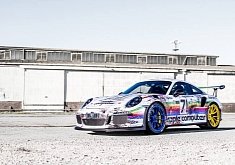 Toyota Confirms More Power Is Coming To the GR Supra, But No Manual Transmission

12 Aug 2019, 19:46 UTC · By: Mircea Panait / More power might be coming to the GR Supra, but the chief engineer has also mentioned that the manual won't happen anytime soon

20 Mar 2019, 13:42 UTC · By: Mircea Panait / What could be the last hurrah for the M2 is right around the corner, with BMW trying to camouflage all the carbon-fiber components such as the trunk lid spoiler

24 Sep 2018, 10:03 UTC · By: Mircea Panait / With the slightest bit of luck, the Supra will be offered with a manual transmission. First in right-hand drive markets such as Japan, then heaven only knows

19 Jul 2018, 13:37 UTC · By: Mircea Panait / For those who like a three-pedal setup and a good ol' stick shift, Aston Martin is much obliged to offer these things in next year's V8 Vantage

21 Apr 2018, 15:09 UTC · By: Mircea Panait / For those who are still with the "Save the Manual" crowd, Aston Martin is much obliged to offer a manual transmission in the V8 Vantage

30 Jun 2017, 11:13 UTC · By: Mircea Panait / Not long now, the 2 Series Coupe for the U.S. market will abandon the manual transmission in order for BMW to focus its efforts on hybrid and EV technologies

Who is Still With The “Save The Manuals” Crowd?

16 Jun 2017, 15:49 UTC · By: Alex Oagana / It's been getting harder and harder to make a business case out of a sports car with a manual transmission, but carmakers are still trying

3 Aug 2016, 09:21 UTC · By: Mircea Panait / Believe it or not, the production numbers for the 2016 Chevrolet Corvette suggest that 22.73 percent of buyers prefer the manual over the automatic

13-Year-Old Drives His Father’s Ferrari, Shifts Gears through the Neighborhood

4 Aug 2015, 15:11 UTC · By: Andrei Tutu / This 13-year-old enjoys his father's Ferrari F355 GTS in manual configuration, touring his neighborhood in the senior supercar

Jaguar Releases a Manual for... the Manual Gearbox: How to Drive a Stick

4 Dec 2014, 13:31 UTC · By: Andrei Tutu / If you happen to walk down the street and see a pair of guys dressed in British Racing Green, who ask you “Excuse me sir, do you have a moment to talk about our Lord, the manual gearbox?&rdquo...

Here's a Ferrari California with a Manual, One of Only Two Built

29 Oct 2014, 17:18 UTC · By: Andrei Tutu / Now that Ferrari is going public, we want to talk about one of the Prancing Horse things that didn’t spread quite so much, namely the manual gearbox California. Only two of these were ever mad...

4 Jul 2014, 11:03 UTC · By: Gabriel Nica / One of the most troubling problems the world of automotive enthusiasts is facing today is the extinction of manual gearboxes, especially on performance cars. That’s one area where BMW is still...