2 The Jetsons Flying Car Morphs Into CGI Existence, All Bubbly and Human-Operated

We have been dreaming of flying cars for decades, but regardless of progress in this field, we still don’t have them. We might, though – and soon.

By definition, flying cars are dual-purpose vehicles that can travel on the road and take-off at a moment’s notice, doubling as aircraft. In recent years, the term has been misleadingly used for aircraft like eVTOLs (electric vertical takeoff and landing aircraft), which are more like big passenger drones than actual cars. But there’s no mistaking the Samson Switchblade, which is a flying car in the most basic sense of the word.

If you’ve been following the progress of this “flying sportscar,” as Sam Bousfield, CEO of Samson Sky and inventor of the Switchblade describes it, there’s excellent news: after 14 years in gestation, Switchblade has been deemed safe for flight by the FAA (Federal Aviation Administration). Now that it has FAA certification, the next thing on the agenda is the first test flight, which, in turn, means that the Switchblade is weeks away from the inaugural flight, Bousfield tells The Hill.

The incredible milestone will cascade into even more accomplishments: Samson is aiming for production to start within 18 months of that first flight, which means that we’re finally going to get the flying car of tomorrow. Well, some of us are, anyway: the Switchblade is offered by reservation, which is free but includes a $2,000 fee, payable within 40 days of the first flight. As of the moment of press, Bousfield says his company is counting on more than 1,600 reservations, including for special editions of the flying car, like the Switchblade Special Edition and Switchblade Limited.

The Switchblade will require a double license to operate in dual mode: a driver or motorcycle license, and a private pilot certification. In most U.S. states, it is legally a tricycle, and Samson notes that customers can still order and drive it on the road while they work towards getting their pilot license. They won’t have to have both at the moment of acquisition. Double insurance (auto and aircraft) will be necessary, since there is no insurance for flying cars just yet.

Switchblade uses a Samson SC200 3-cylinder gasoline engine with Skybrid electric hybrid tech, for a smaller impact on the environment than a private jet and in compliance with current emission regulations. The engine is a modified, rebadged version of an existing one, and it’s already been tested for various issues and has performed up to par.

The Switchblade is designed to look and feel like a car inside, offering premium comfort and safety to two passengers. According to Samson, it will use Formula 1 safety technology, with a safety inner cell and an expendable outer structure that will protect both passengers in case of a collision – even side impacts. Switchblade is “perhaps one of the safest three-wheeled vehicles ever manufactured,” the company declares and no, it won’t topple over at hard turns because it is engineered to handle like a four-wheel car on the road.

The transition between road and air modes is made seamlessly, at the touch of a single button. The wings fold and retract into the lower part of the body, while the tail furls and retracts. One thing to keep in mind is that a high-speed collision on the road will impact the airworthiness of the vehicle, and quite possibly ground it.

Since it was announced, Switchblade went through several production deadlines. It was initially supposed to come to market in 2010, and is now looking at an estimated 2024 production start date.

Pricing starts at $170,000 for the basic model (that’s what Bousfield tells the media outlet, but the website lists a $150,000 starting price), while the Special Edition is $245,000+ and the fully-custom Limited starts at $770,000. Samson hopes to sell some 200 units of the Limited, and if this prediction is based on actual demand and not just wishful thinking, you just know there will be 700 gazillionaires upgrading their fancy toy collection soon. 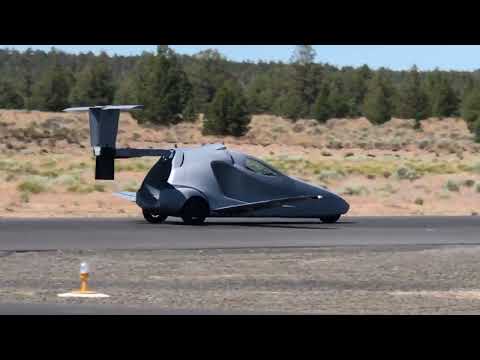