1 Naturo Tiny House Is for the Solo Nomad, Has a Large Bedroom and a Cozy Outside Deck

Tiny houses have become immensely popular, even if they continue to divide opinion. To those looking to downsize and live more intentionally, they’re the perfect solution, offering both, as well as more freedom to move around. But everyone else can hop along for the ride, if only visually.

The Kea Tiny Home Is a Custom Smart House, With Views to Die For

The latest tiny house to make headlines is the Kea Tiny Home from Littlefoot Tiny Homes, a New Zealand-based company that delivers both custom projects and turnkey production units. Featured on the newest episode of Living Big in a Tiny House, it is a true visual treat for the way it’s able to combine an exterior log cabin aesthetic with a very modern and inviting interior.

Available below is the video tour, with Bryce Langston speaking to Leon, who had been living in the Kea for four months when filming took place. Located in Queenstown, NZ, the tiny has unparalleled and unobstructed views of the mountains, which alone might be enough to get even a non-believer into the tiny house movement. But it’s the interior of this home that’s a true standout.

As far as layout goes, the Kea doesn’t stray from the tried solution of a two-story, double-loft design, though it does add a bit more space to one of the lofts with an overhang. It sits on a double-axle trailer and, according to Littlefoot, it offers 50 square meters (538 square feet) of living space within a 10 x 3-meter (32.8 x 9.8-foot) design (the lower floor is shorter by 1 meter / 3.2 feet).
Leon says he came across the company as he started looking into the possibility of moving into a tiny house. He’d previously lived in a Crusader Storm trailer, traveling the country for about one year, and he decided a nomadic lifestyle would be suitable for him on a long-term basis. He sold his house and got in touch with Ben Golby of Littlefoot, who built him the Kea. To his luck, Ben is also renting him the spot of land on which the tiny currently sits. Though Leon says he plans on adding a deck outside, he also hints he might move it someplace else later on.

The Kea offers sleeping for two in its current configuration, but since it has two lofts and with some modifications, it could sleep up to six. Leon has the lounge made into a real entertainment center, with a reclining couch, a massive wall-mounted TV screen above the bi-fold door, and state-of-the-art audio system. He also has automated, adjustable LED lighting with voice control, and automated heating and AC through a mini-split. Even the watering system on the suspended planter box is automated because, really, who likes watering plants?

The kitchen is to the left of the entrance, with a wraparound countertop that integrates a breakfast bar / Leon’s office, and all the appliances you’d find in a kitchen in a non-mobile home. In fact, to paraphrase Leon, it has more than a regular kitchen: two coffee machines, a pot filler (which allows you to fill the pots with water right on the stove), a real-size fridge, a four-burner gas stove and oven, and storage cabinets throughout. Perhaps the most impressive part here is the wraparound glazing, which is also bi-fold, so you can completely open up the kitchen on two sides.

On the opposite end is the bathroom, with its own access door from the outside. Leon’s partner loves to garden, and this helps her not trail mud into the house, because she can hop directly into the shower. Speaking of which, it’s gorgeous, with blue tiles and black fixtures, and a 1 x 1-meter (3.2 x 3.2-foot) diameter. The toilet is a composting one, with a bidet hose next to it, and there’s also a narrow but long sink with vanity, and a wardrobe for winter clothes and shoes.

Over the bathroom is an open loft that currently serves as Leon’s meditation room and is occasionally used for sleeping by his teen daughter. The master bedroom is over to the other side, accessible by means of a bamboo-trimmed staircase with storage underneath, and separated by a glass wall from the rest of the home. The bed is surrounded by bi-fold windows on two sides, which, again, is perfect for the summer.

Beside the smart tech, Leon made sure to include certain rustic touches in the home. There’s a clean-air wood-burning Wagener Sparky fireplace, rainwater collection system and a pump that brings up water from the nearby creek, and a garden shed that houses whatever doesn’t fit in the house and tools. The house also has instant hot water, electricity from the grid, and earth wool insulation.

Asked about the budget for what he describes as his perfect home, Leon says it cost him around NZ$180,000 (approximately US$113,000 at the current exchange rate), when he had it built during the peak of the 2020 international health crisis. Littlefoot Tiny Homes now notes that the Kea Tiny Home starts at NZ$209,000, which would be US$131,240. The views are not included in either price, because you get to choose what they will be. 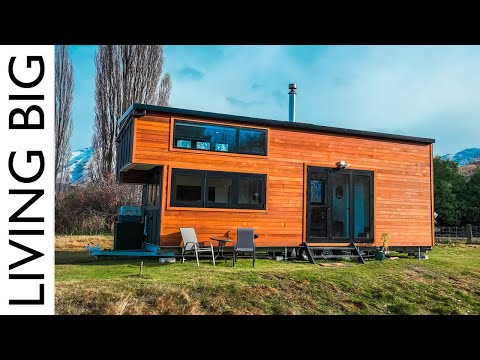