Lewis Hamilton Is OK With Not Racing at the Miami GP Because of His Jewelry, Piercings

Fool me once, shame on you; fool me twice, shame on me. Because too many startups are selling vaporware, no one can blame potential buyers from being reluctant to part with their money for a CGI dream.

Flying Motorcycle Speeder Is Really Happening, and It’ll Be Awesome

The Speeder VTOL (vertical takeoff and landing aircraft) is one such CGI dream, for the time being. Introduced last year to great fanfare, when the first full-scale prototype successfully completed tethered hovering tests, the Speeder comes from JetPack Aviation, a Los Angeles-based company founded and spearheaded by inventor David Mayman.

The Speeder has been described as a “flying motorcycle” because it will favor a seating position for the pilot similar to that of bike riders. But that’s where similarities between the two end, and perhaps the comparison isn’t too favorable on the Speeder, Mayman says in a new interview with Futurism. Calling it a flying motorcycle implies it’s used for recreational purposes, and the Speeder isn’t yet that. Technically, the Speeder isn’t yet anything, but progress is going well and, in two years’ time, it will go into production.

However, before you break out your riding gear, don’t. Much fuss has been made online about this VTOL, but the recreational version is in a rather distant future. Mayman says that it will probably come in phase 2 or 3 of the project, since for the time being, they’re focusing on the military, heavy-duty version: the AUV, aerial utility vehicle. This one will be used for rescue missions mostly, in emergency and military exercises, but by jolly, it will be something else.

That the Speeder will be offered in three version was already known, so what Mayman is trying to do is highlight the incredible capabilities of the most powerful model. It will still be the size of a motorcycle, albeit a tad larger to accommodate some cargo, and it will be “incredibly fast.” Think 480 mph fast (772.5 kph), four times faster than a cruising Cessna, he says. Initially, it will be unmanned or operated remotely, but the possibility of adding a pilot is being taken into consideration.

Stuff like weather conditions or height won’t be an issue for the Speeder, either. It can fly when it’s raining or visibility is nil, it can fly in 50 mph (80 kph) winds, and it can go as high as 20,000 feet (6,096 meters) if it has to go over mountains. If you’re rolling your eyes, Mayman probably expected this kind of reaction: these are scenarios in which the Speeder will fly on its own, on emergency response missions where getting cargo to a certain location can make the difference between life and death.

Mayman doesn’t exclude the possibility of making the Speeder electric but, for the time being, the battery tech isn’t there. So instead, this VTOL is being designed to take all types of heavy fuel, in view of maximum versatility and efficiency. “Kerosene. What’s called Jet A fuel. Diesel. We’ve negotiated a deal with Prometheus fuels. They’re extracting fuel from CO2 in the air. They can produce gasoline, diesel, etcetera. When they come online we’ll be flying net carbon zero,” Mayman explains.

An exact timeline for the Speeder doesn’t exist yet, and for good reason. JetPack Aviation first has to apply for certification, which won’t happen until the end of next year (2023). Add another six to twelve months for the certification to come through, and only afterwards can the company take the VTOL into production. At best, the first heavy-duty utilitarian models will go into production by the end of 2024. No one wants to imagine the worst-case scenario, though it’s easy to.

It’s ok if you doubt the existence of such an awesome aircraft. Mayman himself is aware of the skepticism around such projects in general, and the Speeder in particular. Though initial reports said that the first batch of just 20 Speeder units had already been reserved through pre-orders, Mayman explains that the number was higher: 50 aircraft in just two hours, before they shut down the pre-order books. “We’re not seeking letters of intent until we can demonstrate the aircraft,” he says. “My feeling is the first thing anybody should say is ‘let me see it fly. Bring me to your test field’.”

“Bring me to your test field” could work as a tagline. In 2024 or whenever. 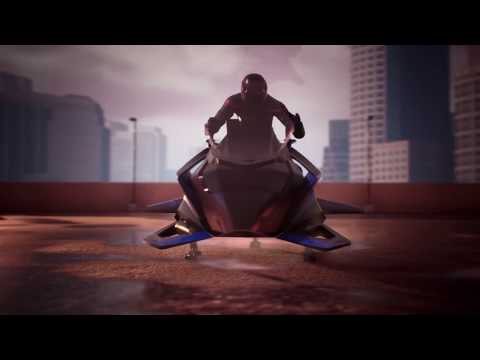