1 From Being Bullied to Million-Dollar Cars, Supercar Blondie’s Story Is Inspirational

4 Lil Durk Got His Ferrari, It's an F8 Tributo, and Yes, He Paid Cash

5 Scott Disick Modifies yet Another Ferrari, Gets His Red F8 Gray-Wrapped
Car video reviews:
Up Next

Having millions in the bank and at least a handful of Ferraris at home are never a guarantee you could even be considered for the Ferrari VIP list – the only way for a shot at the possibility to purchase a limited-edition Prancing Horse. Just ask David Lee about it.

David Lee is a multimillionaire and perhaps one of the most high-profile Ferrari collectors. He is the owner of Hing Wa Lee Jewelers, a high-end retail store that deals in expensive watches like Rolex and Cartier, and he is also a real estate magnate worth an estimated $350 million. More than a “car guy,” Lee is a known collector, having amassed an absolutely superb $50+-million collection of rare cars, many of which are Ferraris: an Enzo, an F50 and an F40, and several F12s, 250s, 275s, and 288s.

In short, Lee’s profile makes him the ideal candidate for the VIP list. Imagine his disappointment when it turned out he wasn’t.

At the 2016 Paris Motor Show, Ferrari introduced the open-top version of the LaFerrari, the very exclusive Ferrari LaFerrari Aperta, only 200 of which would be made for the public, and an additional 10 units for the marque. Pricing for the Aperta started at $2.2 million, but examples have since sold for as much as $10 million, which was the case with the last one produced.

When they were presented, all units were already pre-sold by invitation – you guessed it, to entries on that VIP list. David Lee, one of the most high-profile Ferrari ambassadors (unofficially so), was not among the lucky few. One year later, the LA Times ran a story about the strange occurrence, with the headline reading, “He owns a dozen Ferraris and has loads of cash. Why can’t he buy the elusive $2.2-million LaFerrari Aperta?” The piece argued that Lee was deemed too flashy to “deserve” the Aperta, and that his recent decision to buy a used LaFerrari had angered Ferrari bosses.

In a matter of weeks, the story became whatever proof was needed that getting a limited-edition Ferrari was harder than getting yourself into Heaven when you had lived a life of utter sin, and that Ferrari ownership was a privilege as far as the brass was concerned. For Lee, it meant all chances of getting an Aperta had gone down the drain.

This long intro was necessary to understand the 5-year saga Lee has been through, before finally getting his new Ferrari LaFerrari Aperta. Production for it ended in 2018, but it took this many years for Lee to patch things with Ferrari again, and finally get the car of his dreams. In his most recent video, which you can also see below, he explains what exactly happened to cause the rift – and how one headline looking for sensationalism temporarily killed his once-successful relationship with Ferrari.

As Lee puts it, at the time he gave the interview for the LA Times, he was in talks for an Aperta but had yet to get confirmation that he was on the VIP list. His dealers were giving him strong indication that he was a shoo-in, but he had yet to receive official word.

So, when the reporter asked him if he was getting one, he answered with the truth at that moment: no, he wasn’t; not that he knew of. The LA Times editor then spun the story into how he’d been denied an Aperta, which, in turn, angered Ferrari because they assumed Lee was trying to pressure them for an Aperta through the media.

It would take Ferrari years before they agreed to meet with Lee to hash things out, and then a while longer for everything to become water under the proverbial bridge. This rich-people-problems fairy tale has a happy ending for all involved (minus the LA Times editor): Ferrari retains a popular ambassador, and Lee gets his wish. As he puts it, taking his Aperta out and the feel of the wind in his hair make this 5-year saga worth it. 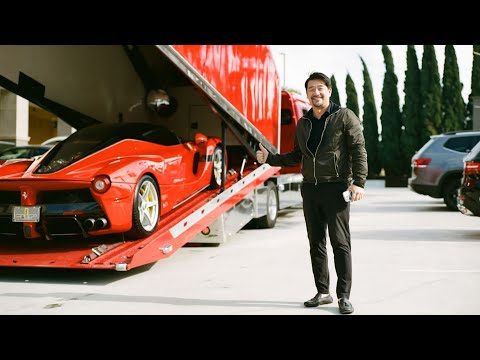