1 Actor Bradley James Rode a Horse in Merlin, Now He's All in on the Ferrari Prancing Horse

To buy a Ferrari Enzo, someone should receive an invitation to acquire it. It was the most exclusive car ever built by the Italian super-car manufacturer. Only one was for open sale and it was offered in a charity auction.

Ferrari introduced the Enzo at the 2002 Paris Motor Show. It was a tribute paid to the founder of the company, Enzo Ferrari. While the company said that it wasn't a race-car for the road, it was actually an F1 car for the road. With its in-board suspension system, with the F1 gearbox and the aerodynamic package that added up to 7602 Nm (1709 lb-ft) of downforce at 300 kph (186 mph), it was faster than any race-car built for the road.

The design was dictated by aerodynamic. The sharp nose with side pods for the wheel arches, the huge air-intakes for the engine and the fighter-jet style cockpit were gathered together by Ken Okuyama, the head of design from Pininfarina. A last touch of the master were the four round taillights, which looked like they were carried over from an old Ferrari designed by the Enzo himself.

Inside, the car kept the bare necessities. A steering wheel with a lot of buttons for setting up the car, two carbon-fiber seats covered in Alcantara, exposed carbon-fiber dashboard and some bits and pieces of aluminum intentionally left uncovered. The Ferrari Enzo didn't even have floormats.

The engine was a 6.0-liter V12 engine that offered 660 hp. It was naturally aspirated and it was installed in the middle of the car, with the gearbox attached in the back and the suspension attached to the gearbox. It was the same as in the Ferrari F50 or in any Ferrari F1 race-car in the last 30 years. Only 399 were sold to selected customers and one was auctioned at Sotheby's for USD 1.1 million. 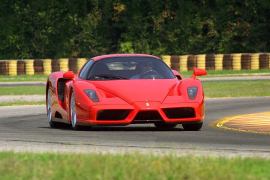