The first hybrid Ferrari hypercar was shown at the 2013 Geneva Motor Show and the limited production of 499 vehicles for the Ferrari LaFerrari made a statement for excellence.

Sometimes, the expression "we took our experience from the track to the street" is not just an expression to sell more cars. For the Italian car-manufacturer Ferrari that was true. Its experience in the Formula One team and with the KERS systems helped the engineering team to develop the LaFerrari.

The aerodynamics of the car was studied and inspired by F1 cars. The front bumper hosts two large air-scoops separated in the middle by a vertical reinforcement. Two air-vents on the short front hood are responsible to cool the front radiators. The very short greenhouse was extended to the rear, in a beautiful shape to host the engine bay.

The interior featured Alcantara on the seats and the dashboard. The seats were bolted to the car and to adjust the driving position, the steering wheel and the pedals were moving back and forth. This system was adopted to install the seat lower and to lower the roof.

The real revolution was on the drivetrain. Unlike other hybrid super-cars or hyper-cars, the LaFerrari uses the V12 engine all the time. The electric motor is there only to help it under hard acceleration, like in Formula 1 cars. It stores the energy recovered during braking into a small battery pack placed in the middle of the car on the floor. Because LaFerrari wasn't a hybrid hypercar. Was a hyper-car with real race-technology. 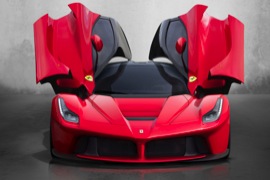