5 Manny Khoshbin Says His Ford GT Is the Best Sounding V6, Excited About Upcoming SF90
Car video reviews:
Up Next

Car collecting is a passion with many of the world’s richest, but when it comes to Bugattis and one-offs, there is only one Manny Khoshbin. The real estate developer and successful YouTuber has amassed an impressive – and very expensive – collection of supercars, and one of them could be yours very soon.
23 photos

Bugattis don’t come up for sale on the specialized market too often, let alone on online auction platforms. This one is a two-tone 2006 Veyron, the 41st produced worldwide and the 12th of those built for the United States market. It also comes from Manny Khoshbin’s impressive collection, and that alone should mean a guarantee that it’s been well maintained and cared for. If there’s one thing that Manny is known for, aside from his passion for Bugattis, it’s how well he takes care of his prized vehicles.

There’s a caveat with it, though, and the Bring A Trailer listing makes no secret of it: as it is right now, the Veyron is “not safe to drive.” With bidding currently sitting at $1 million and four more days to go into the auction (and a reserve that has to be met), the Veyron still needs repairs, specifically to the rear wing, which is listed as inoperable in a December 2021 service record, and to the radiator, which is leaking coolant. The same service record mentions that the car is not road-worthy.

As bidding for the Veyron soared, Manny himself took to the platform to set the record straight: just as he had paid for all the minor repairs and not-so-minor checks ahead of the listing, he would also pay for the issue with the radiator and the rear wing. “That was the only issue about safety!,” Manny says, adding that Bugatti has already been informed of the need for a new radiator.

That out of the way, the Veyron is what Manny described as “basic” a while back, both in terms of performance and customization. He was comparing it to his one-of-one Chiron Hermes (“Chiron habillé par Hermès,” if you want the fancy French version of the name), it’s true, and that’s a very high standard to reach.

Manny is the Veyron’s second owner, and he’s only driven it 200 miles (322 km) out of the total 14,000 miles (22.531 km) on the odo. One of the rare occasions he took it out is shown in the videos at the bottom of the page, when the car was still with its 15-year-old original tires; they have now been replaced with brand new, special Michelin PAX run-flat tires.

Power comes from quad-turbocharged 8.0-liter W16 with four valves per cylinder that sends a factory-rated 987 hp to all four wheels via a Ricardo seven-speed dual-clutch transmission and a Haldex traction-control system, as per the listing. The white and blue exterior is matched by a two-tone interior in beige and blue leather, and both are, as expected, impeccable. The Veyron is offered with a clean Carfax, and a clean California title – and the status of a true collectible, for having been part of Manny’s fleet. 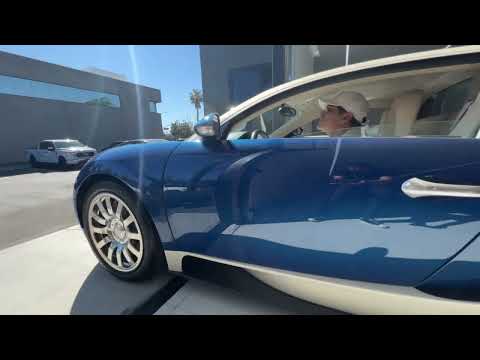 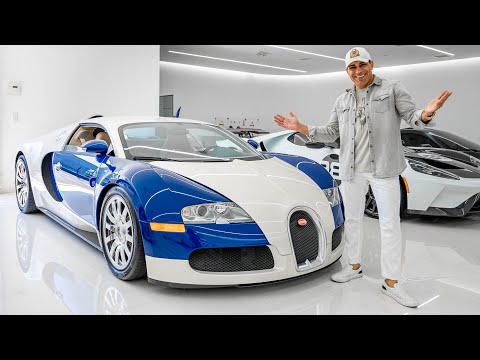