The 2009 Bugatti Veyron Grand Sport came as a roadster hypercar designed to destroy any other car on the road with its incredible performances.

Even though its open-top construction offered half the rigidity of its coupe sibling, it was stiffer than most coupes on the market due to its advanced composite construction that combined magnesium, aluminum, and carbon-fiber elements. Its engine was hand-made by two technicians and provided a minimum of 987 hp, but the carmaker was sure that most of them rocked the drivetrain with more than 1000 ponies. Yet, the Grand Sport was designed to be driven by almost anyone who could grab a steering wheel, see above the dashboard, and reach the pedals.

The exterior was not too much different from its coupe sibling, albeit it missed the polycarbonate roof provided with a Bugatti-branded display stand. The carmaker provided a standard, square umbrella in the front luggage compartment to be used in an emergency and fit in the roof's mounting points so it could stay in place at speeds of up to 80 mph (128 kph) without being rip-off by the wind. Behind the cabin, the carmaker added two safety arches followed by power domes that flanked the massive V-16 engine.

Its leather-clad interior featured two high-bolstered bucket seats separated by a tall center console, which also served as a transmission tunnel. There was no advanced touch-screen infotainment system: just an exquisite Puccini sound system and a five-dial instrument panel. The minimalist design was also pure and showed distinction.

The quad-turbocharged, eight-liter monster engine sent its power in all corners via a seven-speed automatic (dual-clutch) transmission. Bugatti acknowledged that the car achieved its maximum speed with the roof down, but the 0-100 kph (0-92 mph) time was the same, regardless of where the roof was. 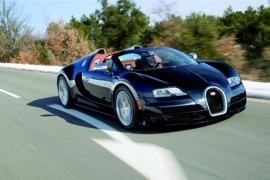