After launching the Bugatti 16.4 Super Sport, Bugatti started to receive questions if there is any chance to built an open-top version of the 1200 hp hypercar. And the answer was shown at the 2012 Geneva Motor Show.

The fastest way to transform a car into an open-top car is to remove its roof, without the side-pillars. That would transform the car into a Targa-vehicle. Even though, it had to be reinforced since there was no connection between the A-pillar and the B-pillar. And, when there is a 16 cylinder engine in the back that pushes with 1200 hp, it needs to be heavily reinforced.

The Grand Sport Vitesse was inspired by the Bugatti Type 37 A, a roadster from 1929 that featured half-doors and the back rear side of the cabin raised to the occupant's shoulders level. For the 2012 special edition, that was even higher, since the engine was in the back. A double-bulge on the engine compartment lid ensured a flowing aerodynamic and hosted the security arches as well.

As usual, the cabin featured two sport-bucket seats that were high bolstered to hold its occupants in place while hard-cornering. The Grand Sport Vitesse was able to withstand 1.4g lateral acceleration. A wind-stopper was available to be placed behind the headrests.

The engine featured four larger engines than the Grand Sport and it offered 199 more power than before. To cool the 7-speed (dual-clutch) automatic gearbox, there were new air-ducts around it. 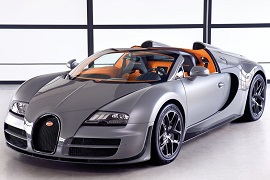 4 An Original Type 35 Bugatti is a Seven Figure Antique, This Replica is 1/250th the Price