Ferrari unveiled a stunning limited series vehicle in late 2021 when it unveiled the Daytona SP3 model, a hypercar that recalled a glorious racing moment of the Italian carmaker's past.

In 1967, at Daytona, on Ford's home ground, three Ferrari racing cars ended the 24 hours race on the podium, leaving the Blue Oval brand in tears. It was the payback for Ferrari's defeat from the 1966 Le Mans race.

Come 2021, and the Italian carmaker built a unique vehicle that evoked that magnificent victory from Daytona and named it Daytona SP3. It was more than just another livery and some fancy seatbelts. It was based on the LaFerrari platform, albeit the hybrid technology.

At the front, the car featured an unusual grille design integrated into the front bumper. Its mesh-grille design sported the Prancing Horse chromed badge in the middle and was flanked by side scoops with four horizontal fins that channeled the air to the sides of the car. In addition, its partly covered headlights featured a lower LED strip for the daytime running lights, while the front fenders resembled those from the Ferrari 330 P3/4 racecar.

Its profile revealed a five-spoke wheels design and an aggressive ascending line. Its open-top cabin featured a tall safety arch behind the seats, followed by the angled side pillars that flanked the engine cover. In addition, Ferrari designers installed a unique design for the car at the back with four full-length horizontal slats followed by another pair of two slats divided by the center-mounted dual exhaust with rectangular pipes.

The powerplant was a naturally-aspirated V12 derived from the one fitted in the Ferrari 812 Superfast but tuned with titanium connecting rods and a revised crankshaft. Its 6.5-liter displacement provided 830 hp and 514 lb-ft (697 Nm) of torque. The engine was paired to a seven-speed automatic (dual-clutch) gearbox, which powered the rear wheels. 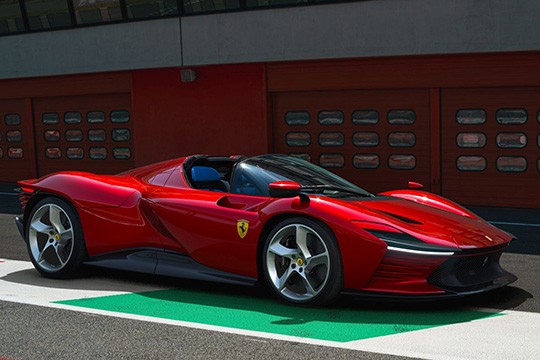