The Icona lineup models from the Italian supercar manufacturer Ferrari set-up a plan to get special attention for special Ferrari models.

And the SP2 was just an example.

It is hard to believe that there will be too many people to run with over 300 kph (185 mph) into an open-top, barchetta style bodywork with just a slice of a windshield in front of them. Not to mention that to be a passenger in such a thing, would thrill even more. But the Ferrari did the car in 2018 and found 500 customers for it.

The Monza SP2 was a resemblance to the old barchetta body-style. That means a car without a windshield. Behind the cockpit, there were two roll-over bars hidden underneath two “humps”. A big “bridge” between the driver and the passenger created the illusion of driving into a one-seater vehicle. The vertical opening of the doors might be considered as “Lambo-style” doors but they were different.

In the cockpit, everything was tuned and addressed to the driver. If in some Ferraris the passenger can select the music to play or change the settings for climate control, here there is nothing to do other than enjoy the ride. And this is why Ferrari built the SP2 after they released the SP1 version with only one seat.

Under the hood, there was a turbocharged V12 engine. The insane 810 hp energy was sent to the rear wheels only via a 7-speed automatic dual-clutch transmission. 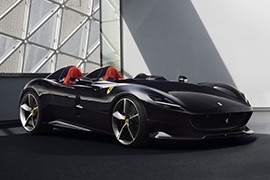