2 On Board Timbaland’s $2 Million Recording Studio on Wheels, the Tricked-Out MMG Tour Bus

3 This Compact BT Cruiser RV Is Loaded With Features, Squeezes a Fireplace Inside Too

Necessity is the mother of invention, they say, though we all know that, these days, you can just create a fake need and then devise a product to address it. Things were simpler back in the early 1950s, and necessity is what ultimately led to the creation of what is believed to be the original bedroom on wheels, at least in the United Kingdom.

Remembering the Iconic Bedroom on Wheels, the '50s Dormobile Campervan

Meet the Dormobile, aka the Bedroom on Wheels, the mobile dormitory. These days, the market is over-filled with literal homes on wheels of all shapes, sizes and for all budgets, but in the early '50s, when the taste for travel was budding, the realization of this concept was revolutionary. Equal parts a daily driver and the perfect family holiday vehicle, the Dormobile offered sleeping for up to four people and even some home-like creature comforts, like a kitchen. Neither amenity was much compared to modern standards, but back then, it was the epitome of luxury. Even better, it was attainable luxury, since one such Dormobile sold for almost the same amount as a car.

The Dormobile is widely regarded as the OG affordable campervan in its home country and, for as long as it was in production, it became synonymous with “campervan.” It wasn’t an actual RV, but a conversion that was used as basis for almost any commercial van chassis available, from Volkswagen, BMC, Land-Rover, Toyota, Ford, and Vauxhall / Bedford, using either a standard layout or a customizable one.

The company behind these conversions was Martin Walter, a former horse harness and carriage maker from Folkestone, south-east England, established way back in 1773. As the automobile began replacing carriages, Martin Walter moved on to making military vehicles and, still later on, commercial conversions, with the first one in a series of iconic models being the 1933 Martin Walter “Wingham” Vauxhall, which could transform from a closed saloon into an open-top tourer.

Opening up interior space would become a trademark feature for the maker, as would the double functionality of the interior, through the Dormatic seats. First introduced on the 1935 Utilecon multi-purpose vehicles, the Dormatic seats could swivel and fold all the way down to become beds, and were described as “comfortable seats for touring, eating and relaxing, or converting to full-length beds in an instant.” Both features would peak in the Dormobile, and turn it into a highly popular RV option for British families from the early ‘50s and all the way through the late ‘80s.

The first proper Dormobile was the 1952 model, a Bedford conversion that did not have the pop-up roof yet. It would be added to the model in 1957, and it would turn it into a smashing hit: at the press of a single button, the roof would open laterally on hinges and offer standing height. The roof-integrated windows for better ventilation and to avoid claustrophobia, since two people would be sleeping up there on canvas, fold-down bunk beds.

Inside, you had two rows and four seats at the front, with the seats folding down and joining to become beds for two more adults. Swivel the first row towards the rear, plop a folding picnic table in between, and you had yourself a dining nook for all occupants. At the rear was the kitchen unit on both sides; the basic configuration offered a sink and two-burner stove, and cabinets, but higher-specced options included an ice box fridge and even a toilet. Fancy living is what this was!

It’s no surprise then that, soon, the Dormobile was on every British road, traveling in every direction, from coastline to the countryside. In 1969, Dormobile Ltd emerged as a separate entity from the Martin Walter campervan division, churning out hundreds of models from its new factory in Tile Kiln Lane, Bexley.

Business took a turn for the worse in the late ‘80s, and in 1994, the entire Dormobile business shut down. It’s still around, though: the company was sold off and reopened in 1997 and, today, they’re still making conversions using the trademarked side-hinged roof under the Dormobile name. They’re also offering maintenance and repairs with original parts to the units of yore.

Speaking of the classics, many of them are still around. Mostly Bedfords and Ford Thames 400Es, many have been restored and are being shown around the country and the continent at various auto events, including the prestigious Goodwood Revival. The Dormobile community is very strong, both online and in person, and the love for this tiny, boxy and now-iconic campervan remains constant. 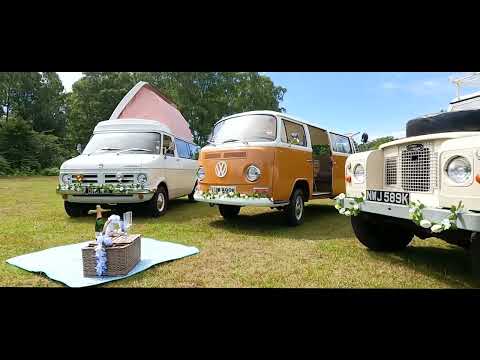 2022 Was a Good Year for Hot Wheels Collectors, Here Are All the 15 Super Treasure HuntsSee all coverstories