5 7even50 One Camper Trailer Is What Living in a Box Looks Like, but Comfortably
Car video reviews:
Editorial

The Volkswagen Beetle is no longer in production, but it remains one of the most iconic cars ever made. For the briefest period of time, it had a trailer to match: El Chico.

El Chico is El Unicornio of fifth-wheel trailers, if you will. Even the son of the man who invented it is very straightforward about it: “El Chico is a unicorn of sorts,” he writes in a post on Medium dated January 2020. Unlike the fabled horse-like creatures who might or might not poop rainbows, El Chico actually exists. It was real back in 1974, and at least one of them still exists – and is being used – to this day.

The “magical” unicorn-y status of the VW Beetle Gooseneck trailer comes from the 1974 ad that showed it in motion for the first time. This video tends to resurface and go viral every few years. From the looks of it, it’s been around since forever, although, until recently, few had any idea whether the fifth-wheel shown in it was real or if it had ever been made. You can see it in the video at the bottom of the page.

The ad is actually a segment from a TV show called Car and Track, and the man driving the Beetle is the inventor of the trailer, Joe Bostian. His son, also named Joe Bostian, confirms in the aforementioned post that the video was the first (and probably only) professionally-done commercial for the trailer. Bostian Sr. had 30 years of experience in RVs at the time, and he thought that his latest idea, that of a trailer for the ever-popular mini-cars, would finally be the one to put him on the map.

He built El Chico through his company International Travel Trailer Inc., but Bostian Jr. says it never achieved success. Exact numbers of El Chico are not known, and since Bostian Sr. passed away before the video went viral for the first time, there’s no way to get clarification. His son remembers only the one in the video being built, “but I only ever saw one or two people work on it, and I’m sure they were friends of my dad.” The idea failed to generate interest – and investments – at the time, so the business never took off.

According to online reports, at least two such units were built, but only one is fully restored. For a Bug lover, it is the absolute perfect Bug aftermarket accessory, in keeping with the Bug styling and tradition, and infusing new functionality to the beloved (tiny) car. For the record, though, it wasn’t designed specifically for the Beetle; Bostian chose it because it was the most popular small car at the time and he needed the association to get attention.

What makes El Chico stand out is the fact that it’s a roof-mounted fifth-wheel trailer, and the size of the Beetle towing it allows it (the Beetle) to make 360-degree turns underneath, offering incredible maneuverability. Then, there’s the size: though small, it includes a bedroom, a kitchenette, a bathroom with shower, and a living area, and most impressively, sleeping for either four adults, or two adults and as many as three children. It will be packed, just like inside the Bug cabin itself, but there is enough room for all these people as long as they don’t move around that much.

In 2014, the team Volkswear found one El Chico by mere chance: it was rotting away at a salvage yard. They rescued it and sold it to Oklahoma Bugs for restoration, but nothing else has been heard of it since. Then, in 2019, a second El Chico emerged, this time in impeccable condition after a 3-year extensive restoration done by Bob from Colorado.

Bob had already owned the trailer for several years before he decided to give it a go to bring it back to life. He paired it with a yellow 1971 Super Beetle, with a roof-mounted hitch that he built himself. He also added a support frame to the gooseneck part of the trailer, which runs all the way underneath, adding stability and better weight support.

Otherwise, the El Chico is unchanged – and it’s a beautiful thing both inside and out. It is believed to be the only fully restored El Chico in the world, and it offers the first chance for anyone outside of Bostian’s family and co-workers to look inside.

There’s a two-person comfy-looking bed in the cabover area, with the kitchenette at the feet of it. Basically, you have to step in the sink or on the counter in order to go to sleep. Right in front of the entrance is the wet bathroom, with a toilet and a full-size shower. You have a small fridge opposite the kitchenette: the original unit that Bob was able to pull out and apart, and then put back together.

The living area includes a wrap-around couch with a table in the middle. Put the table down and you’ve got yourself another sleeping area. You also have some storage space in cupboards and a small closet, large curtained windows that you can open and screen, heating and ventilation. The space is cramped and would probably feel even more so if you really boarded as many as five people inside, but comfy and pretty. For a family of two, it would be the perfect getaway vehicle for the extended weekend, or maybe even longer at a campsite, since El Chico comes with hookups.

Bob says that, despite the fact that El Chico adds weight and drag to his Beetle, he can still hit 55-60 mph (88.5-96.5 mph) with it. This goes to show that, at least in this particular instance, Bostian’s idea was a good one: you can still go camping in your own trailer, even if you own a Beetle. 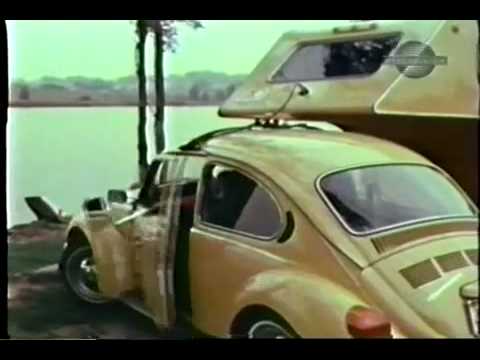 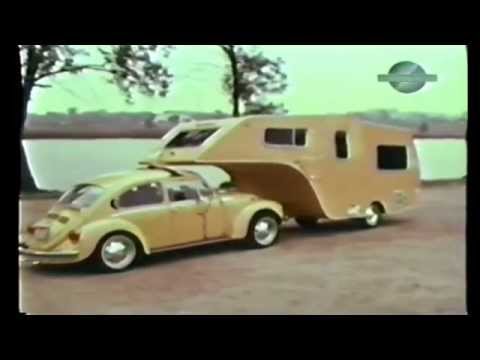 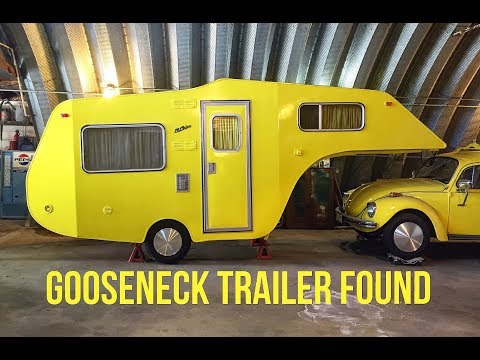