3 Will Smith’s Gigantic $2.5 Million RV The Heat Is Now Used for Unglamorous Glamping

Every once in a while, you just want to pamper yourself. Glamping is pampering for the traveler, a more sophisticated and elevated (and expensive) form of camping that aims to reconcile two seemingly-unreconciliable elements: an experience in the great outdoors and luxury.

July is RV Month here on autoevolution, a full month in which we’re putting the focus on the varied, highly creative and equally efficient recreational vehicles out there, of all sizes and budgets. We couldn’t do it without considering the ever-trendy glamping. One U.S. RV builder is proposing an unprecedented form of glamping in Austin, Texas, where the 7744 Ranch is scheduled to open in August. Just in time to still make reservations, if it turns out it’s your cup of tea.

7744 Ranch might not be a name that rings familiar, but Anderson Mobile Estates probably is. Back in the early 2000s, it was the most famous and popular maker of custom trailers, many of which were leased out to celebrities. We’re talking about the biggest stars in the industry, both in film and music, including Will Smith, Jamie Foxx, Sylvester Stallone, Vin Diesel, Mariah Carey, Whitney Houston, and Jennifer Lopez. And that’s just like the icing on the cake, because the full list is truly an impressive one.

Of these trailers, Anderson Mobile Estates has rounded up just five – the most famous – and is offering them for rent for glamping at this resort. Will Smith’s The Heat is included, as is the unit Vin Diesel used during the production of Fast and Furious in Puerto Rico, and of Riddick: Dead Man Stalking, in Montreal, Canada. Also included is the trailer Jennifer Lopez used: it’s called Baby Girl and it’s described as the “most modern and comfortable” unit they have on site. It’s also incredibly glamorous, so you can get your diva on while glamping.

Baby Girl has a lot of things in common with the most famous Anderson trailers, in that it features the trademark two-story layout, and the hydraulic system that brings the second story out and up from the ground level. It also features two slide-outs, which maximize the space inside the living room, and luxury finishes that wouldn’t look out of place in a five-star hotel suite.

Baby Girl IS a sort of five-star hotel suite, but one that also has wheels and, back when JLo used it, could be hauled from destination to destination by truck. Like the other units from Anderson Mobile Estates, it’s packed with technology, including state-of-the-art audio, several large screen TVs, and CCTV. You also get custom furniture decked in the finest Italian leather, granite and marble, and 1,200 square feet (111.5 square meters) of space to throw a considerably-sized party.

You have everything else you need for the party, too. Downstairs is a generous lounge that can double as living room or private cinema, with a desk area for when you might have to conduct some urgent business. Also downstairs, somewhat mid-level, is a full kitchen equipped with the latest appliances, including 3-door Sub Zero Refrigerator, 2-burner cooktop, convection microwave, large sink and a trash compactor.

You have a full-size bathroom at this level, with walk-in glass shower and sink with marble vanity, and a half-bath at the opposite end, near the kitchen.

The second level opens up at the touch of a button in a matter of seconds, and contains another sizable lounge and the master bedroom, which can become a lounge when needed, as well. Like with Mariah Carey’s “skyscraper on wheels,” the highlight here is a giant U-shaped leather couch, which can easily sit more than a dozen people and becomes a lavish queen-size bed at night. There is another desk and a bar area at the other end, and another half-bath attached to the bedroom area.

From what Anderson Mobile Estates says, Baby Girl is designed to sleep two people, but it’s made to cater for at least two dozens more, whether at parties or conventions, or whatever your idea of glamping involves.

Valued at $2 million, Baby Girl still retains its celebrity trailer character, down to the way in which the desk on the ground level looks like a makeup station. Again, it’s just the place to get your diva on – if you have the finances of one: a unit at this exclusive RV resort goes for $400-$850 a night. We hear interest in the units is already very high. 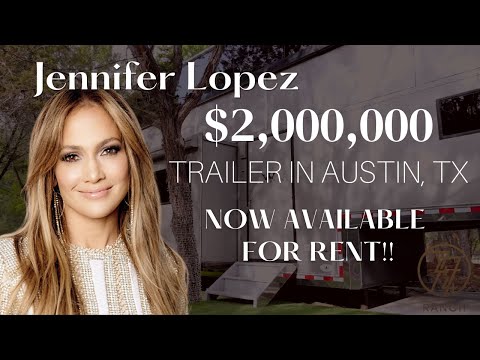 Off-Roading Is a Breeze for the Sur Ron Storm Bee, a Budget-Friendly Electric Dirt BikeSee all coverstories