1 2005 School Bus Becomes a Cozy, Off-Grid Cabin on Wheels, Was Designed to Entertain

3 $14,000 Skoolie Conversion Is the Best Way to Live Rent-Free, Off-Grid and On the Road

Mobile home solutions are very trendy and in demand right now, but it’s ok if you’re feeling overwhelmed at the idea of starting your own project of this kind. As luck would have it, there is a little something for everyone, regardless of budget, experience or skill.

One of the few good things to have been brought on by the 2020 international health crisis is the universal desire to travel more, but locally this time. Forced to social-distance and not allowed to travel internationally, people of all ages turned to local travels by means of the car, a van, a tiny home, or any other type of RV available. Today, the industry is booming, with more options available by the day, both from established manufacturers and as DIY projects.

The Lost At Last skoolie falls in the latter category. Now parked temporarily in the woods on Vancouver Island, B.C., Canada, while its owners are working on a home base remodel, it’s a good – and very good-looking – example of winging it. If anything, it can serve as inspiration and motivation for a next project, if you happen to be looking for either of these.

Lost At Last started out as a short GMC school bus, as Chantelle and Matt say in a new interview with the FLORB YouTube channel. You can see the full chat and the tour of the skoolie in the video at the bottom of the page. They knew they wanted to continue traveling as a couple, having done plenty of individual traveling before. When the world shut down at the start of 2020, they saw it as an opportunity to visit Canada, but they still lacked the proper vehicle for it.

Since a van was too small and a large school bus too big, they opted for a short skoolie. From the start, Matt makes no secret that they had both a place to live during the conversion and a considerable budget for it. They also had friends who helped along the way and were not pressed for time, and all these allowed them to “wing it” when it came to the conversion. They didn’t have a 3D plan of their future home on wheels or even as much as a detailed sketch, but they were still able to make it work.

Like other vanlifers, they learned along the way, through YouTube tutorials and the good ol’-fashioned trial and error – plenty of that, in fact. For instance, they initially installed a little home for the dog next to the driver’s seat, only to find out that it blocked access to the engine in case of a malfunction, so they replaced it with a swivel chair for Chantelle. Another example of how planning is always a good idea with such a project is when they realized cedar had become too expensive for the interior and they were only halfway done. They improvised by adding pallet wood instead and actually got a more striking design.

Lost At Last is designed for life on the road for two adults and the aforementioned pup. On the inside, it looks like a rustic cabin in the woods, but it provides modern-day comforts, including a couch slash dining area, a surprisingly large kitchen that runs almost the entire length of the bus, a bathroom with a small tub, a comfy bed, and plenty of storage.

The wet bathroom is another example of improvising, and it resulted from their desire to have a shower that didn’t feel like a compromise. The solution was a cabin made of wood, lined on the inside with real tiles, with a small tub and a self-cleaning glass door. The composting toilet sits in the shower.

For the comfort of everyday life, this skoolie conversion has a diesel heater and a water heater, and, of course, foam insulation; the vinyl floors make it pet-friendly. There’s a 30-gallon (113.5-liter) tank of fresh water in the garage, and a 25-gallon (94.6-liter) container for gray water underneath, as well as two 350-watt solar panels on the roof, coupled to three batteries and an inverter, on which the couple runs all appliances.

Space is always an issue with whatever mobile home solution, whether it’s a van or a larger-size tiny home. So Lost At Last expands into the outdoors with a rooftop wooden deck and an awning. Chantelle and Matt spent one year on the road with it, before deciding to remodel a home base.

The project took them 5 months to complete, on an unspecified budget. “You can definitely do it for cheaper than we did it,” Matt says in the video below, referencing all the items you could buy used or upcycle to save money for it, “but we had the budget for it.” For a wing-it-type of job, it’s a very beautiful one. 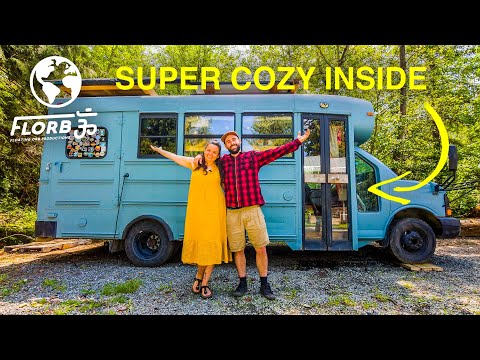