1 This Custom, Two-Story 1953 Spartan Manor Trailer Is an Absolute Dream

5 The 1913 Earl Travel Trailer, the Oldest Trailer in the World, Is Still Around and Awesome
Car video reviews:
Space Junk

Life on the road doesn’t have to mean restrictions in terms of living space but, at the same time, a larger footprint shouldn’t equal decreased maneuverability. In the early ‘50s, one industrial designer came up with a trailer that made use of these apparently contradictory principles.

It was one of the first, if not actually the first trailer to feature an upper level – a double-decker, if you will. Called the Lighthouse Duplex trailer, Model 4800 was part of the Silver Series from Lighthouse Trailers Co., based in Chicago, Illinois. It was then a piece of premium real estate priced accordingly, and today, it is one of the rarest RV unicorns and a true design wonder.

Between the late ‘30s and the late ‘50s, Lighthouse made thousands of trailer units, in a variety of sizes and layouts. It is not known how many Duplexes were produced but, whatever the number, only eight are believed to have survived. Two of them went through Ethan Langley’s skilled hands and were brought back to life and made road-worthy again. Langley is the founder of American RV Restoration, a Texas-based shop that restores, repairs and upgrades anything from vintage cars to decrepit trailers or even discarded, old McDonald’s playground installations.

The Duplex was designed by American industrial designer Richard Ten Eyck. His work included designs for Cessna, Beechcraft, and Bell Helicopter, but he is most famous for the electric Vornado Air fans, which became iconic in the ‘40s and ‘50s, and are still being sold today. He always operated on the idea of putting a new spin on ordinary stuff, so as to make them more visually appealing, ergonomic and functional, as well as to eliminate “mischievous annoyances, the discomforts, the awkward aspects of a product.”

All of this, as well as Eyck’s experience in aircraft design, is apparent in the Duplex, which is believed to be the smallest, most compact two-story trailer ever created. Measuring 28 feet (8.5 meters) in total length, the Duplex offers 48 feet (14.6 meters) of living space in that compact footprint, through the use of a patented, centrally-located upper floor. This second story wasn’t a loft like you can find in today’s tiny houses, but a proper second level, with standing height in the two bedrooms and plenty of storage.

This is where the novelty of the Lighthouse Duplex lies: the ground floor was for daily activities, while the upper level was for rest and sleeping. Two bedrooms were located there, each with something that is known today as “walk beside bed.” Basically, the bed was on a platform and the floor was sunken into the first level and hidden behind the cabinetry here. This allowed standing height next to the bed and the inclusion of a wardrobe in each room. Access to the second floor was done by means of a wooden stairwell, which was also hidden behind the cabinetry on the ground floor.

Speaking of which, it housed a full kitchen on one end, with a dining nook and all the fixtures and appliances a ‘50s housewife would (should) have been proud to use, as the brochure stated at the time: stove and refrigerator, double sink, cabinetry, and plenty of counterspace. The dining nook was a formica table with colorful seats, and was bigger than what you’d expect on a trailer.

The bathroom and a 3-door wardrobe were located in the middle of the trailer. The bathroom had heating, a sink with vanity and toilet, and a standing shower with a small tub. On the opposite end of the trailer was the living room, which included a sofa that could sleep two more people, and chairs for lounging. A total of six people could sleep (and eat and live) comfortably on the Duplex, which was sold under the motto “Planned for living, designed for travel.”

The Duplex weighed 6,800 pounds (3,084 kg) and, even with that second level, stood just 11.5 feet (3.5 meters) high, so it remained relatively easy to maneuver. It was a premium product, featuring quality materials and lots of attention to detail. For instance, the cabinets were all birch wood, and fancy touches like porch light, doorbell and name holder over one of the two entrances. One door opened directly into the kitchen, so kids wouldn’t drag mud over the living room. Lighthouse boasted of making “the finest trailer coach built in America,” saying “When better trailer coaches are built, Lighthouse will build them.”

A very sad ‘52 model of the Lighthouse Duplex is shown in the video at the bottom of the page, with explanations from the same Langley mentioned above. Having owned and restored two of the eight units to have survived, he is somewhat of a specialist on Duplexes. He says one such unit sold for $7,000 as new, back when an average house was priced $6,000. At the time he gave the tour, in 2019, he’d already restored a ‘53 model, which he sold to a museum for $199,000. The one shown in the video, recovered from a hippie commune in California, was restored and eventually sold in December 2021, for an undisclosed amount. 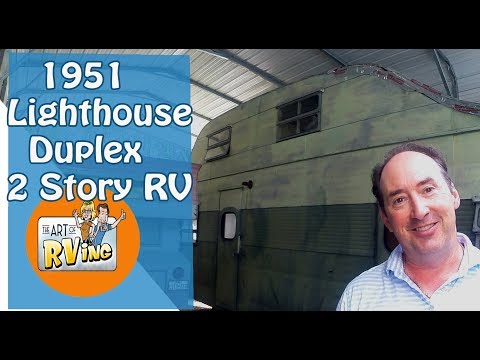