3 Inside Off Script, Jamie Foxx’s Gigantic, Custom Studio on Wheels

5 Inside Will Smith’s 2-Story, $2.5 Million Motorhome, The Heat
Car video reviews:
Up Next

The U.S. Military Wants to Use Rockets for Cargo Delivery, Blue Origin Is On Board

Celebrities are the questionable – and occasionally unwilling – role models of today. As role models, they often find themselves in a “damned if they do, damned if they don’t” position, and it serves to further exacerbate their desire for privacy and secrecy.

Leonardo DiCaprio’s $1.5 Million RV Is a Ginormous Exercise in Opulence

Leonardo DiCaprio is a good example in this sense. Hailed as the last true movie star of a generation, he chooses to keep his private life under wraps and scowls at the frequent paparazzi intrusions into it. He only does the media “circuit” when he has something to promote, and then too, he only talks about the project in question, sidestepping personal questions.

For the younger fans, whose sensibilities have been numbed by overexposure to most celebrities, this might leave them feeling frustrated and many of their questions unanswered. What does Leo do when he’s not acting? What car does he drive? What foods does he like? Where does he buy his clothes from? What are his preferences for living accommodation?

In the grander scheme of things, all these are non-essential and downright invasive, but you have to look at it in the context of an entire celebrity culture that was built on and continues to revolve around topics like these. We can’t tackle most of them, but here’s what we do know: not long ago, DiCaprio liked to roll like a king when he was shooting a movie.

The bigger the star, the more outrageous the demands would be a phrase at home in Hollywood. Because actors spend up to 18 hours a day on set when they’re shooting a new project, their homes away from homes, which we once called “movie trailers” but are now proper mansions on wheels, are the stuff of legends. Will Smith often makes headlines for one of his former RVs, the iconic The Heat from Anderson Mobile Estates, but in reality, DiCaprio is not that far.

He, for one, went with King Kong Production Vehicles for his custom, gigantic trailer. David Rovsek, the founder and owner of King Kong, gave only a couple of interviews on DiCaprio’s custom house on wheels to HGTV and Bloomberg, and these too are old. We reached out to him for an update on the monster RV, and will edit this story accordingly if we hear back.

In a list of over-the-top, insane (and extremely dated, we might add) celebrity motorhomes, DiCaprio’s celebrity suite is right up there in the top three. Estimated at $1.5 million, it offers lavish amenities like heated marble floors, a custom kitchen, and two fireplaces. The styling is incredibly dated, comparable to the 2006 Featherlite Vantare Platinum Plus, with lacquered wood and golden touches throughout, but in DiCaprio’s defense, he used it about the same time, while shooting for Chris Nolan’s Inception.

“This trailer is one of the best of the best,” Rovsek told HGTV at the time. “It's one of the largest trailers available and some of the finest craftsmanship in the world. Leonardo DiCaprio expects only the best and that's what we deliver with his trailer.”

The trailer is 53 feet (16 meters) long and features four slide-outs that double the available interior floor space. There's an open-space living room next to a dining area with a custom, all-marble and granite professional-grade kitchen. "These people don't do much cooking either way," Rovsek told Bloomberg (see the video below), which undermines his effort of showing just how well-equipped the area is, including with a full-size fridge and freezer and plenty of cherrywood cabinetry for storage. Also, here is a small island slash bar.

Under the mirror-covered ceiling is a large leather sofa in the living area. The idea for this RV was to have it be an exact match for any celebrity’s actual home, a five-star resort they favor, or a private plane. “Opulent” is perhaps the best term to describe it, and not in a positive way if you look at it through 2022-tinted glasses, from the TV screen in the door of the dry bathroom to the $50,000 shower made of recycled artisan glass and presented as the jewel in the crown. It took builders two weeks just to put the shower in, Rovsek says. Strangely, it's placed right in the master bedroom, as is a sink with vanity that forms the half-bath.

Because a celebrity must also rest in between takes, the RV has a master bedroom. In total, it features seven TV screens, two fireplaces, and 1.5 baths, which is more than many city apartments can boast of. At $1.5 million to buy or $6,000 a week to rent, it’s also more than regular people can afford – or want to spend on a temporary abode. 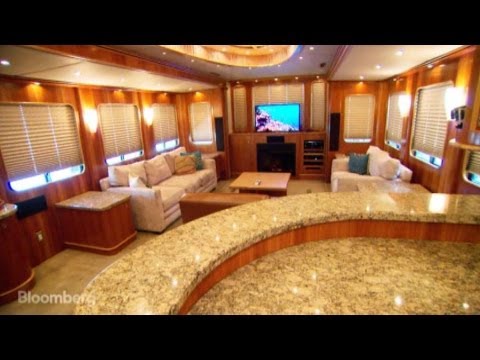