3 The Transformer Rioja Trailer With Balcony, Jacuzzi and 3 Bedrooms Is the Ultimate RV

There are many ways for diehard fans to connect to their musical idols, and buying their music is only the first step. Higher up on that list would be the possibility to share the same space with the idol, even if said idol is no longer occupying it – kind of like what Dolly Parton aims to do with her iconic Gypsy Wagon.

The Gypsy Wagon is not an actual wagon, of course: we’re talking about the undisputed queen of country music, rhinestones, glamor and plastic surgery, after all. It’s a tour bus, but one that Dolly named this way because she spent almost 14 years on the road with it, so it was her home on wheels for all this time, traveling from city to city as she toured, wrote music, books and film.

The Gypsy Wagon is a 1986 Prevost Le Mirage XL bus that was redesigned by Dolly herself, so it would be the home she’d need while on tour and she wouldn’t have to stay at hotels. If there’s anything that Dolly hates more than growing old naturally, it’s flying, or staying at hotels, where you simply can’t get rid of the feeling that it’s an impersonal space, no matter what you do.

Dolly used the tour bus between 2008 and 2022, and she traveled in it for 360,000 miles (579,364 km). Its aesthetic fits Dolly’s free-spirited life on the road and, you guessed it, it is directly inspired and influenced by Romani elements. It has murals and paintings, and mixes of plush and colorful fabrics that might feel overwhelming to most people, but should feel like home for a true Dolly Parton fan.

In March this year, Dolly decided that the time had come for the Gypsy Wagon to retire from the road, so she brought it to Dollywood’s DreamMore Resort and Spa in in Pigeon Forge, Tennessee, where it can be rented out on a two-night minimum basis as the Dolly Suite 1986. This way, she’s letting fans into the most intimate aspect of her life, allowing the tour bus to continue as-is without her having to worry about it, and helping with a good cause. But more on that last part later, when we get to pricing.

The Gypsy Wagon is not for everyone, let’s just start at that. There is beauty behind the madness of clashing vivid colors, the rhinestones, and the sky-high Louboutins on display. Indeed, there are designer ankle-snappers on display and they are, as expected, covered in rhinestones: Dolly had not one, but two custom display cabinets built inside the bus, one on the hallway and one in her bedroom, for her most prized possessions. Those would be her shoes and her many blonde wigs, but the latter have since been replaced by hats.

Because the bus served as an actual home and not just a means of transportation, it has every amenity imaginable onboard. There is a dining area and a full-size kitchen, which includes a full-size refrigerator and freezer unit, and a lounge that can double as a sleeping berth for one, if need be. Next up is a small service bathroom (a half-bath), and three bunk beds. Of the six bunks initially available, Dolly kept only three and converted the others into a wardrobe and the aforementioned display for her shoes. She often said that she liked to have everything she needed for her shows on hand, including wardrobe.

Dolly had her own bathroom, which is also a custom unit: the shower room was fitted with a small tub, while the separate dry bathroom was given a complete remodel, to fit in with the theme. In the bedroom, the queen-size bed was moved to the side, to allow for more walking space, and a small recliner was placed by the window. There’s also a small makeup station, a large TV mounted above the bed, a hidden fridge and freezer unit, and a microwave – in short, the rear end has everything you need so you can choose not to mix with anyone at the front.

Since Dolly spent so much time traveling on this bus, it’s seen some things – many of them important from a musical standpoint, like the writing of Backwoods Barbie and 9 to 5: The Musical. The fact that it’s still packed with Dolly memorabilia should weigh heavy in the balance for any fan considering a stay here, especially since pricing is $10,000 for a two-night stay, which is the minimum. The price includes gift bags and goodies, sleeping for two on the bus and a full concierge service, including a VIP dining experience, access to amenities at the resort, and accommodation for up to four more guests at the DreamMore hotel.

Still, whichever way you look at it, that’s a lot of money for Dolly Parton-themed glamping. If it’s any consolation, there is a charitable aspect to it: a portion of the money goes to the Dollywood Foundation and Dolly Parton’s Imagination Library. “I thought [the bus] could be put to really good use,” the singer said last month. “If you’ve got money – and a lot of people do – they just want to experience that.”

For the rest of us, a video tour will have to do. 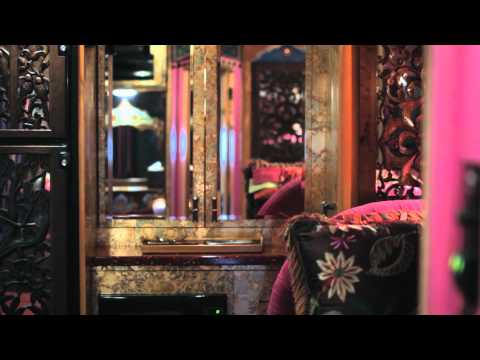 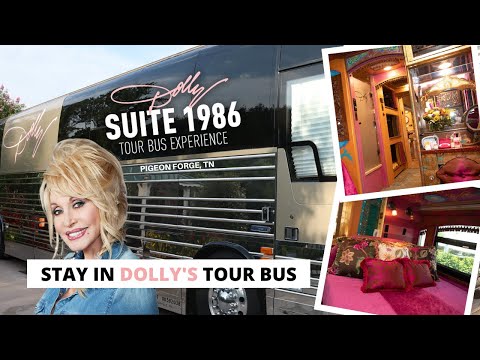