2 Scoot-a-Doo Is a Mighty Scooter Dressed Like a Jet Ski, Hits 60 MPH

3 This New Mini Speedboat Promises to Be as Thrilling as a Jet Ski, With Added Benefits

4 This Aqua-Corvette Is Part Jet Ski, Part Boat, And All About Fun

Dubbed the world’s first AUV (aquatic utility vehicle), Shadow Six Racing’s Typhoon is the embodiment of a completely insane idea that apparently makes no sense yet is so cool that it might just rock the powersports industry.

Imagine you start your weekend with a trip to the mountains where you get to shred the trails in one of the world’s most capable side-by-sides. The next day, you go down to the beach and get to enjoy one of the best jet skis available on the market.

At the end of it all, you’ll probably thank the universe for having the most epic weekend of your life but while you sit on the couch and soke it all in, I’m sure you won’t be thinking about combining the two vehicles.

Well, as it turns out, one man who got to ride both did have this insane idea seep into his mind. Moreover, he set out on a mission to turn it into reality and mass-produce it.

His name is Ryan Goldberg, the founder, and CEO of Shadow Six Racing, a company that was created with the sole purpose of manufacturing the world’s most insane watercraft.

It all started after Ryan fell in love with the Polaris RZR UTV and the Yamaha WaveRunner jet ski. While normal people would just be thankful for both experiences, Ryan decided to merge the two vehicles into one. Using a stock RZR and a couple of used jet skis, he set about combining them, despite everyone telling him the idea made no sense.

He soon found out that building such a craft wouldn’t be easy at all, but even if he encountered many design and manufacturing hurdles, Ryan was undeterred. With the help of Michael Meives, a 50-year veteran in the automotive repair and custom fabrication businesses and a custom jet ski shop from West Palm Beach, Florida called Wamilton's Customs, he managed to solve most of the issues and put together a functional prototype that proved the doubters wrong.

The concept watercraft dubbed the world’s first AUV (aquatic utility vehicle) morphed into the production-ready Typhoon which can now be yours if you have a lot of money to spend.

Like the prototype, the top end of the craft is based on a stock Polaris RZR, but its frame has been completely redesigned by the experts at RaceTech Titanium. As the name of the company implies, the new structure is completely manufactured out of aluminum, which means that it can handle a lot of flex while being exponentially lighter than the original frame. In addition, the new suspension is based on the FOX 3.0 active system so the craft is capable of tackling extreme surf conditions.

Under the frame, where the RZR’s wheels used to sit, the Shadow Six Racing team has placed two jet ski hulls that are based on those of the Yamaha WaveRunner. However, like the titanium frame, these components have been engineered to be lightweight and virtually indestructible. Designed by Wamilton's Customs, they are made out of carbon fiber, and for optimum distribution, each holds one of the Typhoon’s engines.

The units that power the AUV are Yamaha supercharged four-cylinders, the likes of which are found in the GP1800 SCHO R. In stock form, they can spit out 250 hp each, but as you might have guessed, the engines were also modified. The company behind the performance enhancements is called RIVA Racing and their engineers have managed to squeeze out even more power. Thus, the Typhoon can deliver anywhere from 500 to 700 hp, depending on each customer’s desired setup. This means that the insane craft can run at over 90 mph (145 kph).

As you can see in the video below, it’s not only fast but maneuvers extremely well considering how tall and bulky it is. That’s made possible by the bespoke suspension system and the active electronics that syncs both hulls with the rider’s input.

Fast and virtually bombproof, the Typhoon can not only handle rough sea conditions but can use waves as ramps. According to the company, it can jump up to ten feet in the air (3 m) which makes it a must-have for any thrill-seeking, powersport fan.

As for the price, well, it’s as insane as the craft itself. Those who want to own one of these crazy AUVs have to be ready to pay $250,399 for the privilege. And that’s just the starting price. Add some further customization to the package, and your Typhoon will easily exceed the $300,000 mark.

As insane and impossible as the idea of combining a side-by-side with a jet ski one sounded, Ryan Goldberg and his Shadow Six Racing team have proven its feasibility. Not only that, they managed to rack up a huge number of preorders.

It will be interesting to see how many units they can build in the future and how popular this outrageous craft will become. But, judging by the public’s reaction and the company’s preorder list, it has a bright future.

The Typhoon has the potential to morph from an expensive toy for the rich to the basis of a completely new and exciting powersport. Not only that, it can serve as the cornerstone for a new segment in the powersports industry as established manufacturers will be eager to design their own AUVs. 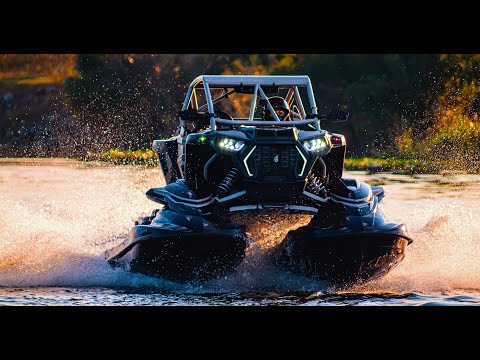