4 GM Design Teases a Sporty CUV, People Be Like ‘EV Chevrolet Camaro, Is That You?’

5 Alfa Romeo Giulia GTAm Becomes Sexier, Can We Call It the Italian BMW M3 CS of Our Dreams?
Editorial

Home > News > Renderings
Aurel Niculescu
Honda has a knack for shaking things up as of late. Just look at the confusion it created with the international HR-V and American (plus China) version, which is globally known as the ZR-V.
20 photos

Plus, they are doubling down on the SUV offerings with the bigger, mid-size battery-electric Prologue Crossover SUV that most people would think is the EV counterpart of the ICE-powered Passport. Alas, that is not the case, as the new CUV has more in common with the Chevy Blazer EV and Cadillac Lyriq than other Honda products.

So, perhaps it might be time for the company to expand into other segments (and clean up the SUV mess, frankly), at least across the virtual realm. A good case in point here is made courtesy of the pixel master, better known as Theottle on social media, who continues to tempt our imagination with cool or quirky pickup trucks for various regions.

For example, not long ago, the author CGI-cooked models such as a virtual, electric VinFast pickup or a digital Suzuki Equator revival. Now, though, he imagines a little unibody pickup truck for Honda that the author says would be popular in such places as South America or Southeast Asia. Well, frankly, by the looks of it, we feel it could do great not just against the third-generation Chevy Montana but also against the new compact pickup trucks sold in North America – Ford Maverick and Hyundai Santa Cruz.

The CGI expert’s idea is based on the Honda BR-V subcompact crossover SUV. This is a model that offers three-row seating as standard, even though it is considered a step below the international HR-V as it was mainly developed for and sold in emerging markets across Asia, Africa, and Central America. But since Honda says its name translates to a “bold roundabout vehicle,” it could also do well as a pocket-sized pickup truck, right? 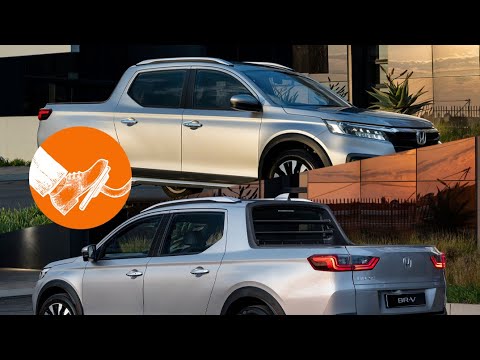