After eight years on the market, Honda retired the second generation of the HR-V and introduced its brand new successor in 2021.

Honda introduced the first generation of the HR-V in 1998, and it wasn't such a big success since the MPV fever still had its customers. That's why the Japanese carmaker pulled the plug on it in 2006 and waited for another seven years to bring a new generation. This time, the car was right, but the time was wrong; hence the world economic crisis hit the automotive world in late 2007. But Honda was committed to keeping the car on the assembly line.

In 2021, Honda introduced its successor and shocked its fan-base world. The third HR-V looked like it drew its lines from Hyundai Tucson. At the front, the new design language for the grille featured body-colored horizontal slats where a blue Honda badge took center stage. With its curved lines and only a few sharp angles, the new generation was completely different than any other Honda on the market, and the only part that resembled the older HR-V was the rear doors' handles masked in the blackened frames.

Inside, Honda designers took their inspiration from the Japanese minimalism trend. The dashboard featured long lines and clean surfaces. Buttons cleared even the center stack, and the only three rotary knobs kept were for the climate control unit. On top of the dashboard, Honda installed the touch screen for the infotainment unit, suitable for screen-mirroring and supported Android Auto and Apple CarPlay connectivity.

Under the hood, Honda offered limited information at the car's launch but assured that it would use hybrid, 4x4 systems. These were already tested on the HR-V's second generation, but only on the Japanese market. 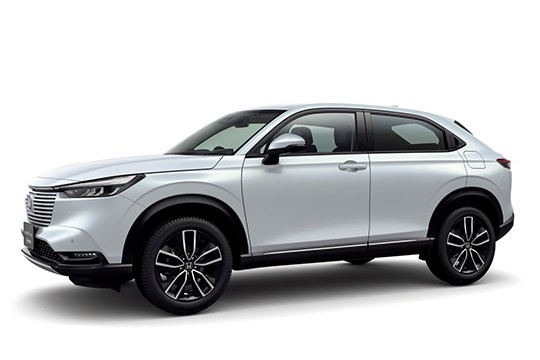