Honda introduced the sixth generation of its best-selling model CR-V on the American market in the summer of 2022, improving the car's image and performance.

The CR-V started its journey in 1995 when SUVs were not highly popular among customers. Still, the Japanese carmaker gambled and scored big wins with that vehicle. Later on, Honda tried to achieve similar success with the larger Pilot but couldn't. By 2022, the CR-V was the best-selling SUV on the American market, its position being contested by more experienced SUV-makers. And yet, the compact SUV stood its ground with constant improvements and proverbial reliability.

With the 2022 model, the sixth generation of the CR-V showed a distinct front fascia that resembled other vehicles in Honda's lineup, such as the Accord, the Civic, and the HR-V. Its angled, narrow headlights were fitted with standard LEDs. The upright, broad grille featured a black mesh with chromed trim. From its profile, the beltline resembled a similar image to the one offered by the Ridgeline pickup. At the same time, out back, the designers reimagined the original concept of vertical taillights but extended them onto the tailgate.

Inside, the CR-V featured a spacious cabin, thanks to the increased wheelbase compared to its predecessor. Another important step forward was in the technology department, where the carmaker installed a 7" digital instrument panel complemented by a 7" or 9" touchscreen mounted atop the center stack. The redesigned front bucket seats offered better side support and comfort for long roads, while at the back, the 60/40 split-folding bench enlarged the trunk from a regular 36.3 cu-ft (1,027 liters) to an impressive 76.5 cu-ft (2,166 liters) when folded.

Under the hood, the CR-V boasted a new hybrid system that combined a 2.0-liter Atkinson-cycle inline-four with two electric motors mounted side-by-side. At the same time, the base version featured a turbocharged 1.5-liter unit that was mated to a CVT, which mimicked fixed gear ratios. 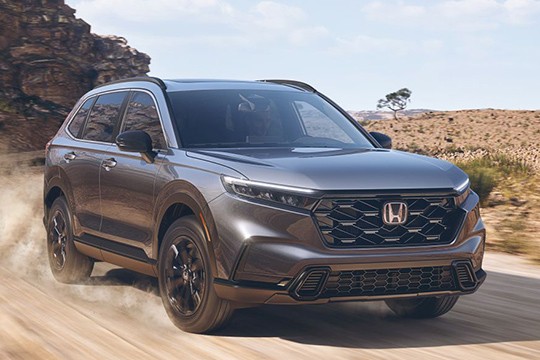 1 Another Carmaker Confirms the Struggle: The Demand Exists But Not Enough Chips