Honda unveiled the European-inspired Civic hatchback for the North-American market, and it offered more than just a new shape compared with its sedan sibling.

The Japanese carmaker had that unusual policy to offer different body versions for specific markets. For many years, it delivered a Civic Coupe in America but not in Europe and a hatchback on the Old Continent but not in the New World. Starting with the 2022 model, the carmaker changed its mind, canceled the coupe, and introduced the hatchback as a second option for the sedan version.

While the two siblings shared most of their components, they had some different design details. For instance, the hatchback featured a concave front grille with a honeycomb pattern. The lower bumper design showed a broad, A-shaped grille, similar to the one installed on the sedan version. While both cars sported the same design, the hatchback had round fog lights instead of squared ones. From its profile, the five-door version featured black side sills, which made the car looks slimmer, but the most noticeable difference was in the back. Honda designed treated the vehicle with European ingredients, and its designers took their inspiration from there. Thus, the raked-forward C-pillars and the tailgate formed a sloped, Kammback-style ending. The rear bumper was completely different, and it sported two chromed, fake exhausts and a diffuser.

The interior featured an unusual honeycomb pattern on the dashboard. Honda never did that before, and it was a bold move from the Japanese carmaker. It installed a standard 7” touch-screen on top of the center stack with physical turning knobs for volume and tuning/selection. As an option, it provided a 9” display for the Sport Touring trim level. Inside the instrument cluster, the Civic hatchback offered a seven-inch color display and an analog speedometer, or a completely digital 10.2” TFT for the full-spec version. The carmaker installed a 60/40 split-folding bench at the back, which provided a larger trunk than the sedan.

Honda installed the same powerplants as in the sedan version: a 1.5-liter turbocharged and a naturally aspirated 2.0-liter. The carmaker paired both engines with a CVT transmission but added an option for a six-speed manual. 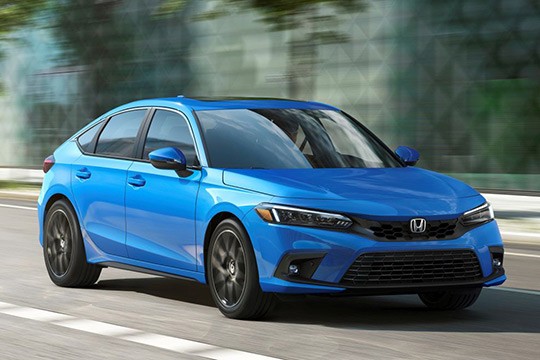