2 Tiny GMC Motorhome Is a Classic Hot Wheels Casting, You Can Still Get One

It seems that every month I'm spending more and more on purchasing Hot Wheels cars. Not because I'm buying a lot of them, but because I've been making the switch to the premium, adult collector models. After buying the Red Line Club Skyline GT-R, I finally got ahold of one of my dream cars: the Fast and Furious Mitsubishi Eclipse GSX!

Some people might argue that the Toyota Supra featured in The Fast and the Furious is the most popular car in the first installment of the franchise.

But we shouldn't forget that before driving the Supra, Brian took to the streets in a 1995 Mitsubishi Eclipse GSX. "Danger to manifold" aside and blowing up thanks to Johnny Tran aside, the GSX is still one of the coolest cars ever to grace the big screen.

You'll find plenty of scale replicas of the car online, but it's relatively strange to see that Hot Wheels first came up with their version back in 2019.

Back then, the Eclipse featured Real Rider 6-spoke wheels, which were less than perfect for it. But Mattel made amends in 2021 upon the release of the Fast Stars series.

This time they fitted the Eclipse with their 10 Spoke Modern wheels, and the result was considerably better than the previous model. Some collectors complained that this set wasn't as exciting though, apart maybe from the Dodge Charger.

But the Fast and the Furious franchise is a never-ending source of inspiration for Hot Wheels, and we were bound to get a new release on this theme soon.

Mix 5 of the Replica Entertainment is out now after we recently saw Mix 4 deliver five unrelated items. We're looking at five vehicles, four of which were featured in the first movie of the franchise. And all five cars are rolling on black Real Rider wheels: two with six spokes, two with 10 spokes, and one with just five spokes.

As you've figured out already, this is the third appearance of the 1995 Mitsubishi Eclipse GSX. But it certainly won't be the last. The second car in the set is Letty's Nissan S14.

Do you remember the scene in which she pulls up to the restaurant, with BT providing the soundtrack while they all get out of their cars? While the base car is now at its fifth iteration since 2019, this is only the second time it's been revealed as a replica of Letty's vehicle.

What's even more interesting is the fact that we've never had a mainline version of this casting before, believe it or not. That's also valid for Brian's Eclipse, but not the case for the other three cars in the set.

Leon's yellow Nissan Skyline GT-R is the third car to be unboxed here, and the combination of colors does seem to work quite well here. The exhaust is a bit of a letdown, but then again we should remember how much an Ignition Model replica costs.

This is the 10th time Mattel is putting out an R33, and you'll find a Tokyo Drift replica of it if you're a fan of the model. Some people will argue that the R34 GT-R is still the king of all JDM cars, and it comes as no surprise that this casting has been around since 2010.

That's right, there are over 30 variations out there including multiple 2 Fast 2 Furious replicas. If someone could just come up with a way to add under glow to these diecast cars that would make for 1/64 scale model perfection. The 2017 Acura NSX is the last car to be featured in this set.

In case you stopped watching the franchise after Tokyo Drift, you might not even be aware that Tyrese Gibson drove it in F9: The Fast Saga. You can get a total of 10 of these cars on preorder for about $72,99, but you might have to wait a while until you get them delivered. 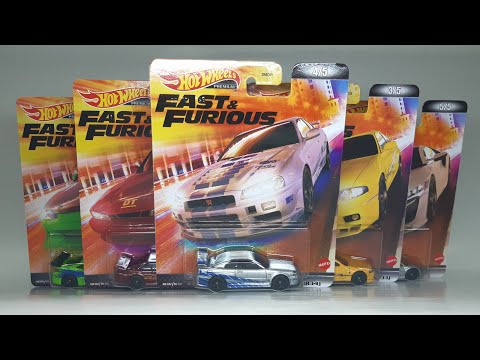