3 Nissan Skyline '2000' GT-R Morphs Into Perfect Surfer Hauler, Albeit Only in CGI

5 “Kenmeri” 1973 Nissan Skyline GT-R Takes a Crack Dose of 'Cuda to Enjoy the Sights
Car video reviews:
Up Next

Both the Nissan Skyline GT-R and the BMW M5 have their cult following, as they're both amazing cars. They were both on the market at around the same time but were quite different from many perspectives. Now, we all know the tuning potential of the R34, but how would a stock one fare against the German engineering masterpiece?

Power is sent to the rear wheels only, as the driver has to operate a six-speed manual gearbox. While you can't deny the sporty character of the M5, it is ultimately a luxury saloon which means it's not the lightest car you can buy at 3,957 lbs (1,795 kg).

Some people will be shocked to know that the R34 GT-R is not as light as a feather as they would have thought. But it's still not as heavy as its opponent, sitting at 3,439 lbs (1,560 kg). While it's lighter, it's also slightly down on power.

The famous RB26DETT unit is capable of delivering 276 horsepower and 290 lb-ft (392 Nm) of torque. Similar to the M5, this also has a six-speed manual gearbox. But the major difference here is Nissan's renowned AWD system.

We all know the stories behind the Japanese gentlemen's agreement of the '90s. According to those, manufacturers agreed to limit the maximum horsepower output of their cars.

But in the end, some people have pointed out that cars like the GT-R went over that limit reaching as much as 320 hp. That makes today's battle fairly difficult to predict, so we'll just let the two drivers do their thing instead.

Shockingly enough, the BMW takes the lead right off the bat as the R34 seems to have had a bad start. With so few stock GT-Rs still around, it feels strange to see this one losing the battle against the M5.

JDM fans will be happy to see the second run, as the Nissan is off to a much better start. Any miss-shift could spell disaster for the drivers, but they manage to keep it all together across the finish line. And now they're tied 1 to 1.

It doesn't take long for German engineering to triumph over the Japanese one, as the M5 crosses the finish line in 13.3 seconds. The gap is quite small, as the GT-R is just 0.1 seconds behind by the quarter-mile (402 meters).

The rolling race is up next, and both drivers will be starting from 30 mph (48 kph) in second gear. This now looks like a completely different ball game, as the instant throttle response of the big V8 seals the deal for the BMW M5. By the time it crosses the half-mile (804 meters) finish line the gap is quite painful to watch for Nissan fans.

Starting from 50 mph (80 kph) in third gear doesn't change things much, but the battle does become a lot closer as they start at 60 mph (96 kph). Even with twin turbos under the hood, the Nissan still has to struggle with some turbo lag in the lower part of the rev range.

As fun as drag racing may be, we would still love to see a comparison between these cars around a proper race track. That would make for a more conclusive test and would settle this once and for all. Until then, we're left with one more challenge.

Whichever car manages to stop first from 70 mph (112 kph) will score another point in today's challenge. Godzilla finally catches a break, as it comes to a complete halt a bit sooner than its opponent. The gap isn't all that impressive, but remember Torretto's words: "Winning is winning" 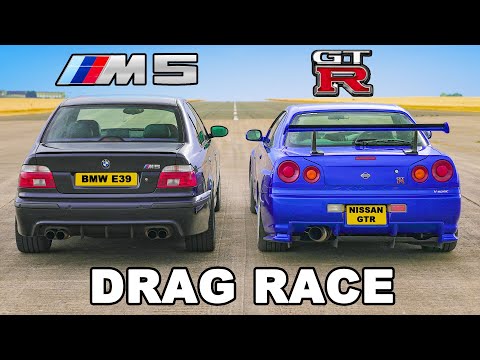