1 Powered by a Modern 392 HEMI, the Ringbrothers 1969 Charger Is Restomod Perfection

Decades Before Lambo, This Tri-Engined Biplane Bomber Was the Most Bonkers Italian Vehicle

"They don't make them like they used to" is what many veteran pickup truck enthusiasts say when they see a modern truck. Although, in large part, an exaggeration, the statement holds true to some extent, especially if you compare today's pickups with legends from the past, such as the original Dodge Power Wagon.

Forget the Ram TRX, Legacy’s 620-HP Vintage Power Wagon Is the Coolest Truck You Can Buy

One of the first mass-produced 4x4 civilian trucks, the venerable machine was introduced in 1945. It was based on the WC series, which served in the Second World War and, thanks to its simple yet rugged design, it became America’s most dependable four-wheeled workhorse for the next three decades.

Today, trucks are much different. Thanks to 21st-century tech, they are more powerful, more fuel efficient, and offer creature comforts that our grandparents couldn't even imagine back in the day. However, one can argue that they aren’t built to endure decades of punishments without requiring extensive repairs.

The good news is that there are independent businesses out there who refuse to abide by the planned obsolescence strategy and choose to build bombproof vehicles that combine the simple design and reliability of old with modern technologies.

One of them is Legacy Classic Trucks, a company based in Jackson Hole, Wyoming. Its founder is Winslow Bent grew up around formidable machines since his father restored military vehicles as a hobby. One of the first vehicles he drove was an old Power Wagon, and the experience sparked a love story with the iconic Dodge.

Over a decade ago, Legacy’s first major project was restoring and modernizing a Power Wagon, which was sold for over $100,000. Its success led to many similar restomods, and today, anyone who wants to own one can order a fully customizable variant straight from the company’s website.

Available with either a regular, extended, or four-door crew cab, each truck starts as an original model that gets fully restored and outfitted with a wide range of modern hardware. Customers who want more passenger room rather than a pickup bed can also choose the Carryall, an SUV-style wagon body variant of the classic Dodge.

The team starts by upgrading the original frame, which is fully boxed from the front to the midsection for added strength. Once this process is completed, a GM steering box and a Saginaw power steering pump are added. The suspension is also brought to contemporary standards using military-wrapped leaf springs and Bilstein or King long-travel shocks. Furthermore, the chassis is equipped with Wilwood brake calipers and drilled rotors, as well as a GM Hydroboost master cylinder, stainless steel lines, or Lokar emergency brake linkage.

As standard, power comes from either a 425-hp Legacy-tuned Mopar 6.7-liter Magnum V8 or a 6.2-liter LS3 for those who want five extra horses and don’t mind the sacrilege of driving a Dodge with a Chevy engine.

There’s also an optional 3.9-liter Cummins Turbo Diesel with an output of only 170 hp, but this highly efficient motor it’s able to produce 480 lb-ft (651 Nm) of torque which is as much as what the Magnum can provide. Moreover, this option increases the towing capacity to 12,000 lbs (5,443 kg), 4,000 lbs (1,814 kg) more than any gas-powered version. The list of optional powerplants is finished off by a high-performance supercharged LSA that spits out 620 hp and 620 lb-ft (840 Nm) of torque.

For the transmission, there are two options to choose from. One is the reliable New Venture Gear 4500 five-speed manual, a unit used by both GM and Chrysler in many of its past models. The other is the GM 4L85E four-speed automatic, another reliable gearbox popular among custom builders.

Regardless of the  engine and transmission combo, the modernized Power Wagon comes with an Atlas 3.0:1 two-speed transfer case, high-clearance differentials, and Dana axles. Its off-road capabilities can be enhanced even further with optional components such as a four-speed transfer case, front and rear ARB air lockers, or Axletech portal axles.

Although the bodywork retains its classic appearance, it receives hundreds of hours’ worth of work. The original Power Wagon came as either a single cab with a nine-foot bed or the aforementioned Carryall configuration. The company provides the additional extended cab or four-door crew cab versions by manufacturing the extra panels from scratch at their facility.

The completed bodies are given a single-stage paint job using one of five production paint codes. Of course, if someone requires a custom paint job, Legacy is more than happy to oblige.

Like the exterior, the cabin preserves the old-school styling. Customers can choose between bench seats in both rows, individual bucket seats, or even luxurious captain’s chairs, all being fully upholstered in leather. Every truck comes with Classic Instruments gauges, and creature comforts such as power windows or air conditioning can also be fitted.

The behemoth sits on 17-inch Trail Ready Beadlock wheels with 37-inch Toyo Open Country all-terrain tires and is delivered with a 16,500-lb. (7,484 kg) Warn electric winch as standard. Bigger wheels, tires, and stronger hydraulic winches are available on the long list of optional goodies, which also include electronically-retractable step ladders, power take-offs (PTOs), auxiliary lights, a stainless-steel toolbox, or even a snowplow.

The end product is a 7-foot-tall (2.13 m) blend between old and new that is not only seriously cool but capable of conquering the roughest terrain imaginable. Legacy has taken this hand-built monster to the Moab desert, the Rubicon trail, or even through the perilous King of the Hammers course.

One major downside is the price which starts around $325,000 for the two-door regular cab and can easily go over $500,000 for a fully-equipped, four-door crew cab. That’s enough to buy fourteen quad cab Ram 1500s or six TRX trucks.

Still, if money is not a factor and you want a modernized American icon that’s built to last, Legacy's incredible Power Wagon deserves your attention.

In the promotional Toyo Tires video that you can find below, Winslow Bent takes you on a virtual tour of the 106th truck built by his company, a turbo diesel-powered version with a bespoke interior and many optional features. 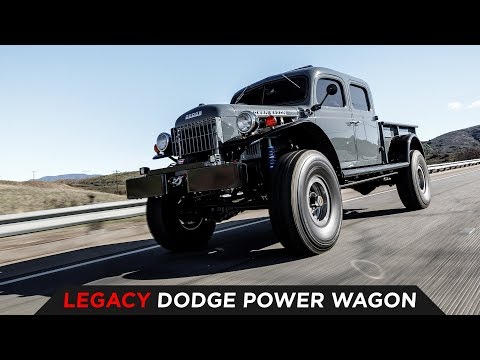