Dodge built the 1969 Charger 500 to get the homologation and race in NASCAR, but it couldn't win the championship despite all the efforts.

By the late '60, the carmakers understood that aerodynamics plays a crucial role in motorsport, and they tried to adapt as soon as possible. Chrysler worked with Lockheed-Martin and studied the Dodge Charger in their aerodynamic tunnel. The standard vehicle was a disaster, and modifications followed. The first result was the Charger 500, which was supposed to dominate the NASCAR championship but lost it to Ford. Chrysler had to build at least 500 vehicles, but somewhere on the way, it lost the count and stopped at less than 400 units.

At the front, the car sported the same four round headlights and a thinner metallic bumper. Its grille was flush to the hood's leading edge. It was supposed to have an apron too, but Bill France (then the head of NASCAR) was reluctant in aerodynamic features and didn't approve it. On the A-pillars, the engineers added chromed elements that made the air ran smoother to the sides. The most significant modification was at the rear, where the taillights were installed into a cavity that formed huge swirls over the trunk. Instead of redesigning the entire rear panel, the carmaker added a clear panel over the taillights, and that fixed the problem.

The interior was mostly a stock Charger with some unique badges. Its vinyl-covered bucket seats sported adjustable headrests, but those counted only for the street vehicles. On the manual gearbox versions, the carmaker installed an angled gear-stick toward the driver.

Under the hood, Dodge installed a choice of two engines: a 426 Hemi and, after some debates, a 440, respectively. Chrysler offered the car with the latter to help it sell more units. 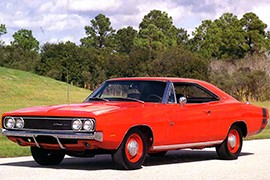