2008 Bugatti Veyron Drag Races Four Different Teslas, Does the Bug Still Got It?

Although produced for a total of five generations, Dodge’s Viper is clearly a rare sight on European roads - even more so when the ACR version is involved. That's in contrast with its rivals in this latest episode of the Novitec Supercar Diaries YouTube series – a modified Ferrari 458 Speciale and a Porsche 911 GT3 RS.
39 photos

Still, we have a feeling that Bijon de Kock, the host, used the Novitec-tuned Prancing Horse as a great excuse to spend some quality time with the naturally aspirated V10 monster from America. After all, he clearly mentions at one point during the video (embedded below) there was no plan for the shoot “so we’re just doing it live as it is... looking forward to see some sideways action.”

That’s basically the name of the game, although we can tell you the European sports cars were there mostly for psychological support rather than diving in on the drift action, tempted as we are in the intro with a 911 GT3 RS donut. But let’s not get ahead of ourselves and give you the proper rundown.

Bijon de Kock went to Austria to meet up with popular vlogger and car aficionado Schaefchen, who so happens to own a few exotic gems that are rarely left dwelling for too long in the garage. That's because he’s a man who’s with “cars sideways more than driving them in a straight line,” according to the Supercar Diaries host.

The reason for that is both straight and simple: “it’s more fun.” Well, hold on to that part for a bit, because the garage visit is up first. That is also the place where we meet all of the main protagonists: the 911 GT3 (the one in the video is a different, albeit identical, example), the Novitec 458 Speciale (full kit, save for the wing and side window covers) and the star attraction – Dodge's Viper ACR.

The latter easily “takes the cream,” and the owner describes this 2017 example as “the more powerful, more extreme GT3 RS made in America.” We’re not going to be arguing with that, given the carbon fiber aerodynamic body kit, the meaty 645-hp 8.4-liter naturally aspirated V10 engine, and the roaring side exhaust setup - although the latter is actually a custom job.

Instead, we can tell you to jump at the 3:30 mark if you want to see the cars on the road. There's some neat POV footage with the 458 Speciale and the 911 GT3 RS from the 5:35 mark before the main Viper ACR course starts once the clock reaches the six-minute threshold. 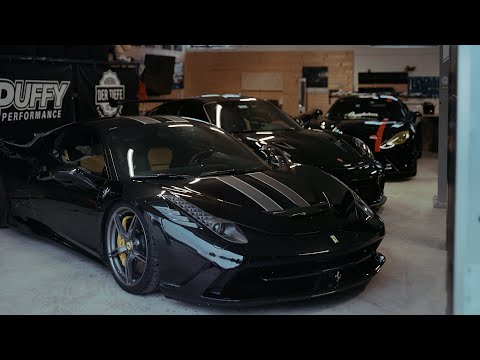