Dodge was not completely satisfied with the regular Durango in its lineup.

Neither were some of the customers, who wished to have a more powerful SUV, so they could brag in front of those who spent more than double for a European, Stuttgart-based brand.

Dodge was already known for its high-performance vehicles such as the Challenger and the Charger. But the Durango was no slouch either, especially after it received some SRT (Street and Racing Technology) improvements.

The Durango was tall, wide, and with a menacing look that dominated the road. The SRT version was even meaner, with its A-shaped lower air intake mounted on the bumper and the side scoops for brakes cooling. To confirm the car's heritage and the engine's hidden secrets, the Durango SRT sported a scoop on the hood. Despite being an SUV, the Durango SRT featured side skirts that diminished the ground effect. It featured different side skirts than the rest of the Durango range.

Inside, the sporty appearance featured front bucket seats with high-bolstering. Despite being tuned for performance, the SUV still provided room for seven adult passengers and offered decent room for two adults on the third row. Dodge made a special dashboard design for the driver, with more red inside the instrument cluster. Another touch-screen sat atop the center stack for the infotainment center, above the controls for the climate control center. An SRT button placed underneath them controlled the drivetrain. It helped the driver quickly transform the SUV from a family hauler into a drag-strip contender.

Under the hood, Dodge installed a 6.4-liter supercharged V8 carried over from the Jeep Grand Cherokee and provided 475 hp (485 PS). It was mated to an eight-speed automatic gearbox that sent the power in all corners. 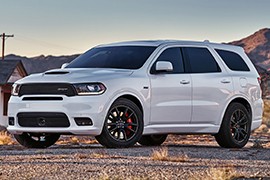