5 Porsche Lets YouTuber Explore the Museum Archives, Let's Dive in With Him
Car video reviews:
Up Next

They say that racing-bred cars are not exactly fast in a straight line, but Porsche certainly begs to differ. Even with a huge wing attached to the back – which our famous socialite says is akin to “a picnic table” - the 911 GT2 RS jumps to incredible speeds disturbingly quickly. Sure, there are a couple of secrets...
30 photos

First off, the second Porsche addition to the GerCollector garage (the other being a 911 GT3 RS, which the owner says is now “a lot slower”) is not a regular 911 GT2 RS. Instead, it was optioned with the full Weissach package – specific clues are the carbon fiber hood with stripe, or the spectacular bronze magnesium wheels with center locks.

Also, according to Shmee, the car has been through a little bit of fine tuning – a Ryft catless titanium exhaust system and a few mods from PP-Performance later, the stock power (700 hp from the 3.8-liter twin-turbo flat-six) goes up a notch or two, at 800+ hp and almost 900 Nm (664 lb. ft.) for an even more bonkers experience.

Actually, Tim acknowledges the fact that every time he has driven or took a ride in a standard Porsche 911 GT2 RS he was literally “blown away” - so he was fully expecting from the get-go to come up with an even more insane adventure on this occasion. And he arrived at the conclusion even though he was not the one doing the actual driving.

Instead, he was relegated to the passenger seat of this paint-to-sample Vesuvio Metallic with red Alcantara example, keeping company to the driver and the beautiful titanium roll cage protecting them both. Still, he managed to acquire some highlights for the viewers, such as the garage cold start at the 3:40 mark that made our acquaintance with the bespoke exhaust system.

The exhaust remained a constant companion throughout the drive on some unrestricted sections of the Autobahn (jump to the 5:40 marker for the clear road), where the seven-speed PDK dual-clutch relentlessly goes through the gears as the monster builds speed disturbingly fast. Up to around 323 kph – which is exactly above the 200-mph threshold!

In case you wanted to check out the chameleonic Vesuvio shade, there is also some lovely outside footage of the GT2 RS (from the 9:30) mark, and a great occasion to hear the bangs of the exhaust that sound like hunting gunshots on the forest road... 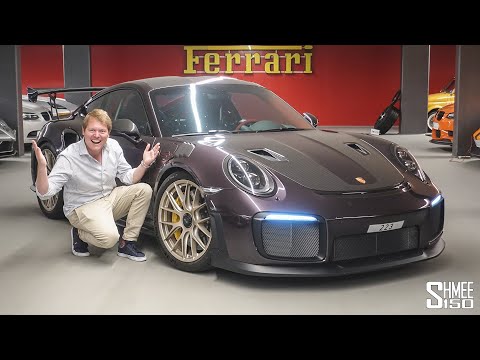