The Dodge Viper released in 2012 at the New York Auto Show and was the fifth generation of the model, the first one being unveiled in 1991, with its prototype tested in 1989.

The Viper is a 2-seater coupe available in 2 trim levels: the base Viper and the GTS version. The new generation returned with a new design and a new interior. Although it used the same 8.4-liter V10 hand-assembled engine and had the same chassis, they were both improved and upgraded. The engine output increased with 40 hp and the chassis had a two-mode dampers.
The engine produced 640 hp and 600 pound-feet of torque, and the power was sent to the wheels through a 6-speed manual transmission. The car could sprint from 0 to 60 mph in just 3.7 seconds. The engineers managed to reduce the car’s weight with around 100 pounds, compared to its predecessor, by reworking the several areas of the chassis.
The new models were hand built at the Conner Avenue Assembly Plant in Detroit.
With a more powerful engine came more efficient brakes, being equipped with 4-piston Brembo brakes with fixed-aluminum caliper and vented rotors.
The interior was upgraded with new premium materials and technologies. The new generation is the most spacious released, as the floor pan and the bulkhead have been extended. 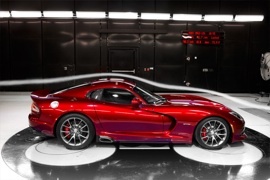