Both were truly muscle cars in the disguise of a four-door sedan.

Europe had its four-door powerful mid-size sedans such as the F10 BMW M5 or the Mercedes-Benz E63 AMG. Dodge was the brand assigned by the FCA to build the most powerful vehicles in the U.S. lineup. The standard SRT featured a 6.4-liter V8 engine while the Hellcat version was offered with a supercharged 6.2-liter V8.

From the outside, both SRT versions featured a scoop on the hood, but the Hellcat also featured two vents to help cooling down the engine. On the front fascia, on the big grille in the bumper, there was a removable transverse panel for the license plate. In case that the owner would use the car on a track. SRT stood for Street & Racing Technology and it left its marks on the exterior look with a black mesh grille, aerodynamic side sills, and a trunk-spoiler. In the rear, the 4” exhaust tips were noticeable. From the outside, the big Brembo brakes were noticeable through the 20” light-alloy wheels.

Inside, both SRT versions featured bolstered front seats, but with better leather for the Hellcat version. Also standard was the 7” infotainment unit that could show performance data for the vehicle, such as the ¼ mile time, torque, power, oil pressure, etc.

The SRT was offered with a naturally aspirated, 492 hp engine, wile the Hellcat version, with its supercharged engine, boasted out 707 hp. 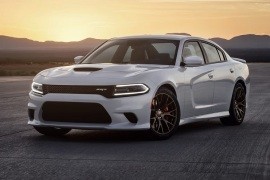