The Hornet nameplate might not be new, but it's fresh on a Dodge production vehicle, and even though it was supposed to be a hatchback in 2011, it ended up as a compact crossover eleven years later.

Sharing its underpinnings and assembly lines with the Italian Alfa Romeo Tonale, the Hornet returned the nameplate from history bins. First, it belonged to the Hudson brand, which was bought together with the AMC by Chrysler in 1987. Then, in 2006, the American carmaker showed a concept car named Dodge Hornet. Still, the project was axed in the turmoil of the world financial crisis. But in 2022, the Hornet finally made it to the market.

The curved body style was penned in Italy and adapted for the U.S. brand with specific "angry-looking" headlights that flanked a slim upper grille. At the same time, the lower apron sported a broad air intake and two side slats for cooling the engine and the brakes. Its profile resembled the one from the Alfa Romeo Tonale and Giulietta, with an arched roofline sloped to the back on the tailgate.

Inside, the Hornet featured a standard 12.3" digital instrument cluster and a 10.25" touch screen display for the infotainment unit placed atop the center stack. The front bucket seats fitted as standard could've been replaced with high-bolstered ones that gave more side support during high-speed cornering. At the back, there was hardly any room for three adults, especially since the middle one had to sit above the transmission tunnel.

The Dart was the first electrified Dodge. Besides the turbocharged gasoline engine, it featured a 25-hp electric motor to improve acceleration times. In addition, a gasoline-only version was also available. It used a turbocharged, 2.0-liter inline-four carried over from Alfa Romeo's parts bin. 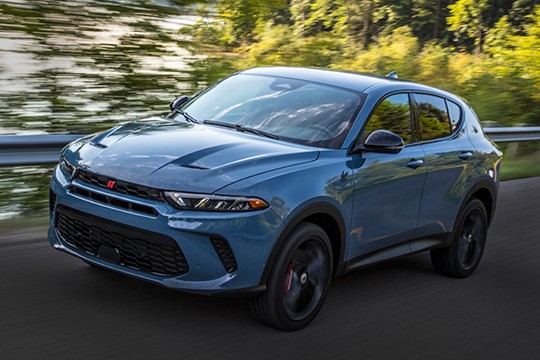 1 This 1,080-HP Dodge Hellcat Is "Catching Criminals Wherever It Roams in Texas"

2 1975 Dodge B200 Sportsman Maxiwagon Camper Has All the Good Vibes, Still Great for Camping