1 Car Thief Tries To Flee Police Through a Metro Station, Gets Stuck on the Stairs

5 Vanlife Sucks at Current Gas Prices, So This Vanlifer Is Moving Into a Tesla
Coverstory

Mircea Panait
Mazda confirmed no fewer than four all-new SUVs in October 2021, all four based on the so-called Large Architecture that supports rear- and all-wheel-drive setups. The first member of the Large Architecture family is the CX-60, a two-row SUV that comes with a plethora of engines.
15 photos

The CX-60 is a narrow-body SUV twinned with the CX-80, a three-row affair that will be sold in Europe, Japan, and Australia. Over in the Land of the Free and Home of the Brave, prospective customers will be treated to wide-body SUVs in the guise of the CX-70 and the recently spied CX-90.

A reader of The Fast Lane shared a couple of pics of a CX-90 prototype, which is presented by The Fast Lane as a CX-70 even though it’s the CX-90. The long wheelbase and generous side windows pretty much confirm that it’s a direct competitor to the award-winning Jeep Grand Cherokee L.

A production schedule published by Mazda further confirms that the CX-90 will start production this year for the 2023 model year, with the CX-70 expected to follow suit in 2023 for the 2024 model year. “You see inside the hub a little silver bit, I believe it’ll be a drive shaft,” said Roman Mica of TFL. “This is an all-wheel-drive machine,” he concluded, apparently forgetting that Mazda’s new platform is rear-wheel drive. Had it been an all-wheel-drive affair, Roman should’ve looked at the front wheels for axle shafts.

Provided by TFL reader Igor, the pictures don’t provide any clues in regard to what’s hiding under the hood. Be that as it may, we already know that Mazda has engineered the Large Platform for both four- and six-cylinder lumps from the Skyactiv-G, Skyactiv-D, and Skyactiv-X engine families.

Regardless of powerplant, the CX-90 and CX-70 will feature an eight-speed automatic rather than the six-speed transmission of the CX-50 and CX-5. We can further assume that Skyactiv-D isn’t coming to the United States, leaving the 2.5-liter Skyactiv-G, 2.5-liter e-Skyactiv PHEV, and 3.0-liter e-Skyactiv X MHEV as potential engine options. The plug-in hybrid produces 327 metric ponies (323 horsepower) and 500 Nm (369 pound-foot) in European specification, making it the most powerful Mazda road car ever.

Indeed, this four-cylinder PHEV is more powerful than the RX-7 FD3S many peeps can’t help but simp over. The Japanese automaker also quotes 5.8 seconds to 100 kph (62 mph), a limited top speed of 200 kph (124 mph), and WLTP combined fuel consumption of 1.5 liters per 100 kilometers. In U.S. miles per gallon, that’s a simply ridiculous 157 miles per gallon. 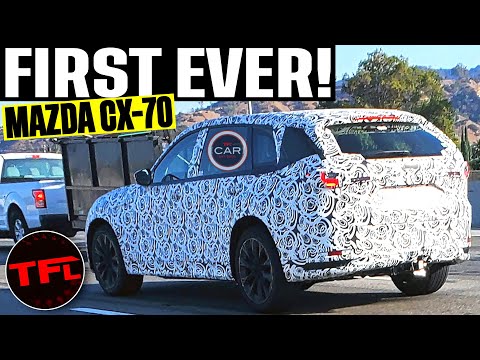