Mazda's first ever production electric vehicle, the MX-30 is a funky looking crossover that attempts to combine the design ethos found on old Mazda sports cars with the comfort and features of a modern compact crossover.

Its exterior look represents a new step in the Kodo design language, for the first time featured on a production EV with a Mazda badge that tries to enter uncharted territory for the Japanese carmaker.

By far the most controversial design feature of the model is represented by the so-called "freestyle rear doors," which are smaller than on a normal car and open backwards. Harking back to the Mazda RX-8's clamshell rear doors, a model that also lacked a B-pillar, they provide a distinctive openness to the interior whenever you step inside or outside the car.

Inside you are greeted with a cabin made mostly from fibrous materials. For example, the door trim is covered with fibers made from recycled plastic bottles, while parts of the center console trim are covered in texture called Heritage Cork, which is a materials harvested from the bark of trees without felling. For the first time in a Mazda production car, a 7-inch touch panel heater control has been fitted inside to offer better control.

On the powertrain side, the Mazda MX-30 makes due with an electric motor that delivers 143 horsepower and sends all its power exclusively to the front wheels. Since it's seen mostly as a city car, the model uses a somewhat small 35.5 kWh lithium-ion battery, which gives it a total range of up to 209 kilometers (130 miles). 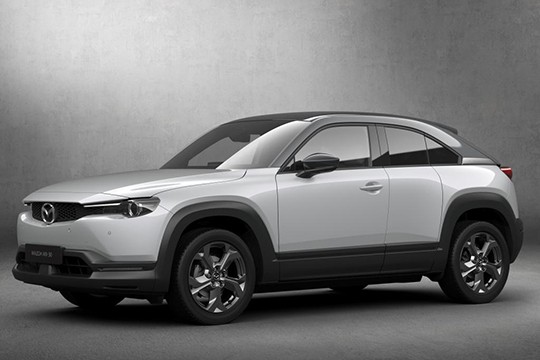