After successfully introducing the MX-30 EV crossover on the market in 2019, Mazda made another ambitious step and launched a version fitted with a range extender in 2022.

The Japanese automaker was renowned for its rotary engines installed in the RX-7/RX-8 series. Unfortunately, this type of powerplant failed to meet the pollution norms and had to be ditched in 2012. But Mazda didn't want to sack it for good and found a new way of using it by installing one in the MX-30 e-Skyactive R-EV. Such a long name for a version...

Mazda didn't bother to create a new design for its crossover, and it looked similar to the regular MX-30 EV. It still sported those rear-hinged rear doors, like in the former RX-8, and without a B-pillar. The only significant difference was the new badges, which said "e-Skyactive R-EV."

Inside you are greeted with a cabin made mostly from fibrous materials. For example, the door trim is covered with fibers made from recycled plastic bottles, while parts of the center console trim are covered in a texture called Heritage Cork, which is a material harvested from the bark of trees without felling. For the first time in a Mazda production car, a 7-inch touch panel heater control has been fitted inside to offer better control.

Under the hood, the car featured a drivetrain consisting of an 830 cc Wankel rotary engine that was used exclusively to charge the batteries. A 17.8 kW battery pack and a 50-liter (13.2-gal U.S.) tank fueled the system and helped the vehicle achieve a range of 373 miles (600 km). Unlike the MX-30 EV, the R-EV version was propelled by a 170 PS motor, thus providing slightly better performance than the 143 hp provided by its electric-only cousin. 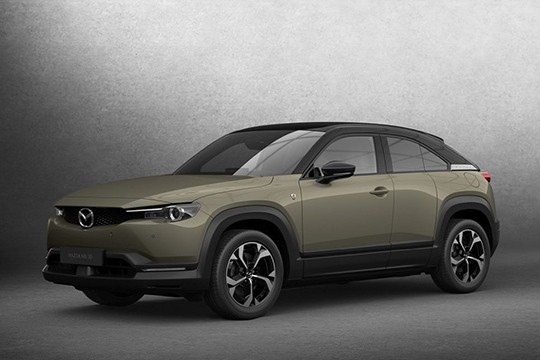