Mazda understood that despite offering a good MPV on the market, the Premacy, the SUVs, and the cross-overs are the future.

And it combined these two types of vehicles.

Developed on the new Skyactive platform, the 2016 CX-9 was the second generation of the big SUV built by Mazda, mostly for the U.S. market. It combined the look of a sporty SUV, such as the CX5, with a minivan's utility, such as the Premacy. That should've made everyone happy.

Designing an SUV with three rows of seats in a package that should look like a regular SUV was never easy, but the Japanese designers did it. The 5 meters (199 in) vehicle disguised the three seats in a usual, BMW X5-like form with flowing lines and a massive front grille that attracted attention more than the third row of side windows and the thick D-pillar. The CX-9 headlights resembled those installed on the Mazda 6 sedan, or those on the CX5 with their slim, curved shape barely seen between the hood and the very tall bumper.

Inside, the dashboard resembled the one in the MX5 or the 3, with an infotainment screen placed on top of the panel and a three-dial instrument cluster. The tall center console placed between the front seats inspired the driver to feel like it was a sports car, despite the high seating position. To access the middle and the last row of seats the rear doors were longer than those found on the CX5 model.

Under the hood, the CX-9 featured only one engine option, a turbocharged 2.5-liter inline-four unit paired to a 6-speed automatic transmission. Mazda offered the 7-seat SUV either with a front- or all-wheel-drive system. 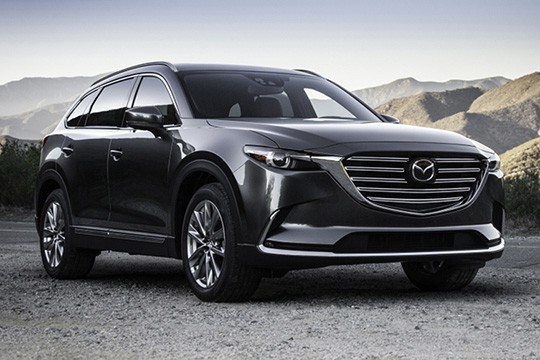